These are the real life victories of marriages from our SUM Nation. The accounts are astonishing and filled with powerful truth that prayer, love, commitment, humility and the power of Jesus in the life of a believer can change a marriage..... a life forever!

READ AND CELEBRATE WITH US!

To write the title of this post, brings tears. I've waited since I began this blog in 2006 to write this very post.

So with intentional honor to our Father, Jesus and Holy Spirit, today let me share my news, officially. Please hear me first, THIS IS NOT ABOUT ME. This moment was a lifetime of love of God for my husband. And I’m trying to remain low-key about it all. I’m allowing my husband to walk into this new season and let him take his time and find his own way forward in faith. And I’m still really processing.

But for me, my I give all honor and glory to our Lord. He has been faithful.

On March 14, 2019, on our 27th wedding anniversary, my husband, Mike, was baptized and made his confession of faith in Jesus Christ.

Read the rest of the story: The War Is Over - Chronicles of the Donovan Clan

I was raised in a wonderful Christian home but walked away from God as a teenager because I thought that I was missing out on all the fun in life. I married, started my career, bought a home with my husband and had two babies. After 12 years of living for myself, I finally realized that the “fun” and all the other things I used to fill the void were leaving me feeling empty. I knew what I was missing was a relationship with Jesus and in 1996, I rededicated my life to Him. I wanted my children to know Jesus and began to teach them and brought them to church with me. I longed for my husband to know Christ, so I began praying for him.

Read this rest of this amazing story, More Than I Could Have Asked or Imagined

When I met my husband in our early twenties, we were both believers but not even close to walking with Jesus. Fast forward to my early thirties, we were married, and I was pregnant with our first child. It was at that time when Jesus finally got hold of me.

Read this rest of this amazing story, God Can Change a Man's Heart. 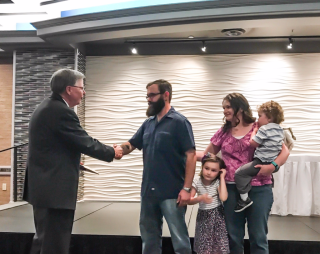 I have been a servant of our Lord and Savior since December of 2007. The man I now call my husband was instrumental in God’s plan to bring faith and the grace of God to my heart. My husband grew up in a Christian family and is well studied on the scriptures. I relied heavily on his guidance and understanding of the Bible for my own spiritual health rather than read the Bible myself, and so I remained childlike in my faith for many years.

Read this rest of this amazing story, God Talked with This Husband.

February 27, 2017: from the comments on The Rains of God's Glory by the Praying Wife:

Just the title of your entry today gave me chills a little bit. The last month has been like an emotional title wave of blessings in our home. My husband and I both grew up in the church, but 7 years ago, after 4 years of marriage and a very traumatic personal experience, he decided he didn't believe in God anymore. I have wept and prayed over this wonderful man that I love for years. However, with what seemed like no warning, in the last month he has completely turned around, changed his life-path, begun DAILY Bible study & prayer, and given his life back to Christ, not only personally, but professionally. Only yesterday, my husband disposed of all of his atheist books/paraphernalia, trashed his entire stash of liquor and led me AND our children in prayer of his own choice -- TWICE.

Last night, we were enjoying pillow talk. He told me he had decided to turn back to God and had told God he wanted to believe, but to help his unbelief. He said when he threw out all those things yesterday that he was "preparing for rain, just like in 'Facing the Giants'. (I wasn't even aware he'd seen that movie!) If I intend to give my life back to Christ, I'm all in... I want him to know I'm serious."

My husband endured 7 years of drought... we are now experiencing the rain and oh, how sweet it is. A mighty fortress is our God, A bulwark never failing... 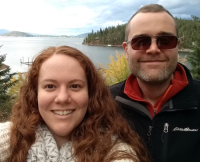 I first found the SUM Community in July 2014 when my husband said our marriage was over. We'd been married 1 month shy of two years. We were on vacation when he announced the end of our marriage—and needless to say, it was out of the blue. When we'd met in 2010, I was far away from God, but when my husband (Jason) literally shattered my world, I was only left with God to cling to. I surrendered my life to God and gave Him all the broken pieces. I vowed to fight for my marriage and pray without ceasing for Jason to know God. I connected with a local church and began to discover the strength and joy that only God gives.

In December 2014, Jason left our home in NC and moved all the way to WA state. I didn't hear from him for months. That was the lowest time in my life, but I clung to Habakkuk 1:5 which says, "Behold ye among the heathen, and regard, and wonder marvelously: for I will work a work in your days which ye will not believe, though it be told you." I also relied on Romans 4:18a, "Who against hope believed in hope..."

Read this rest of this amazing story, God Saved My Marriage ... and My Husband.

October 14, 2016: From the comments on A Tale of Vindication

Via: From this day forward I choose to forgive! The enemy has absolutely NO ground in my marriage.

I have been a silent SUMite member for nearly three years when my husband and I separated and The Lord revealed to me to not give up and He changed my heart for my husband. Fast forward three years we have a new baby boy, moved cross country and now being beyond blessed in ways I could have never asked God to bless us before. Your posts have been so encouraging in the most troubling time of my life and I thank God for this family of SUMite men and women. Our God is REAL and He forgives. We have been made clean by the blood of Jesus and His Holy Spirit. Amen!

Praying for peace and restoration in those hurting. Love you all❤️

Meet Kim Valentine: One day after 18 years of marriage my husband informed me he was moving out.  As soon as the words left his lips, I knew, this time, it wasn’t an idle threat. God immediately began revealing to me every sin I committed that degraded, emasculated and disrespected my husband. Every time I blamed, criticized, condemned or withheld intimacy was before my very eyes. The blinders were ripped off and the ugliness of my sin was repulsive to me! Here I was a Christian for 16 years, playing the part, talking the talk and holding the church positions. I felt so valued by my Christian “family” as one of Christ’s ambassadors to the world, but the witness to my own husband was like filthy rags before God.......

Read the rest of this astonishing story.....Broken In A Thousand Pieces But Jesus... (click here.) Originally published; February 28, 2016

Some people have such grace and joy that reflects in their words, actions and face.  The ones who hear God’s power or see it, quickly they begin smiling and praising God.  Not me.  I first have to pick up my lower jaw off the floor, have a few rounds of recovery time and then can join the rest who are applauding God’s amazing power, mercy and grace.  Even a year after my husband encountered God and accepted Jesus as his savior I still regularly am in shock and disbelief.  I am confident the heavens sit back and prepare to enjoy the show my face displays.

After an exhausting year of relearning marriage and transitioning into an equally yoked marriage, I found myself at a concert with my family. .... He Became a Believer But It Wasn't What I Expected... (click here.) Originally published; February 25, 2016.

Mandy's Story: Oh He is faithful.  If you’ll spare me some time, please let me share some of my story with you all.  I pray God will use it to speak life into just one of your dear hearts.

I have a confession.  I had a problem, a big problem.  This problem was masqueraded by me being responsible and wise.  I didn’t trust God.  I trusted myself, my ability to budget and plan.  I trusted in financial security.  I trusted in money..... Easter and our Faithful God...(click here.) Originally published; April 4, 2015.

I met Stu May 3rd, 1986; appropriately, at a bar. We were married 11 months later as equally yoked pagans. Stu was a teacher when I met him, but decided that financially, this was not the career that would give him the life he wanted. So, we moved from Denver to San Diego so that Stu could pursue his MBA, while I worked to support us as an Aerospace engineer. It was during these two years that I was first exposed to my husband’s anger. I did not make a connection between his bursts of anger and his use of alcohol. I drank too, so his drinking was meaningless to me. I do however remember times when friends had to carry him to our car because he was so intoxicated.

After graduate school, we moved back to Colorado where Stu eventually landed his first Chief Financial Officer position at the age of 29. I gave birth to our two children and our life went on.... Mismatched, Addiction and Now He's A Believer...(click Here.) Originally published; November 4, 2014.

To make a very long story as short as possible, since October of 2014, Grace has become a staple word in our home.  Even for my husband!  I can’t begin to tell you what a Divine move this.  My husband, Bob, is a very hard, military man (served 32 years).  He was trained to be this way; however, he has a soft heart that he rarely exposes.  That would mean he’d have to be vulnerable, and, well, we know how that is.

We started having conversations about Grace, what it means, how it transforms.  He’s an author of action-adventure men-type books, and he even has a chapter talking about Grace.  Oh, this only made possible by HIS AMAZING GRACE… .... This IS Grace In Real Life... (click here.) Originally published; February 26, 2015.

I've been married 27 years and the first 11 were miserable. I was a young bride and then a young mother. I had three babies one year apart and also was learning that marriage was not the fairytale I thought it would be.

My husband worked the night shift. Twelve hour shifts as a police officer which gave him a lot of days off as his schedule was three days on and three days off. Most of his off time was spent out at a local bar or with friends. There was even a time he was keeping company with another woman.... Read the Rest of Lisa's amazing testimony HERE. Originally published; July 31, 2014.