Home Who We Are Salvation Stories Significant Resources Meet The Team The SUM Shop Lynn Donovan Ministries New Here? Video Teaching
And So We Cross the Finish Line
We Made a Memorial Before God

A Tasty Revelation About Our Recent Fast 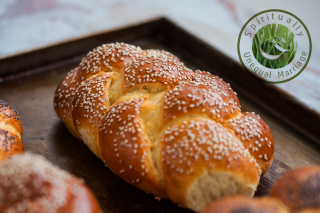 We finished our fast on Friday, and WOW what an effort. I talked to a few of you over the week and know it was a special time for many of you.

I'm going to linger on this topic of fasting a little longer, if you don't mind. What did our fast do?

Personally, as a little wink from God, I've sometimes found that something happens in the last hour of our corporate fast. In one of our first fasts, for example, I walked into the bedroom in the very last hour to find Bryce lying on the bed reading a Christian book!!!

It's as if God was saying "Yes, your fast did something in the Heavenlies. Be assured."

This year, however, nothing happened in the last hour, and I wondered... Would God show me anything about the fast? Well, roll around Saturday morning and I had a cool thing happen. That morning, I rose early. The whole house was quiet, I wrapped myself up in my cosy robe and stood in the kitchen making coffee, ready for some time with God.

As I did so, I checked email and saw that I'd received an email from a ministry friend. The title was "Sorry, weekend note that could not wait." This man did not know I'd/we'd been fasting.

He had not wanted to disturb me on the weekend but said that he felt like a baker who had just produced a fresh warm loaf of bread and it had to be delivered NOW. As in, the Holy Spirit was prompting him to write.

Well, that was fun, as I'd been fasting for a week and now it seemed God was sending me a loaf of steaming warm bread as if to say "I'm giving you a word now in response to your hunger." Awesome!!

For he satisfies the thirsty and fills the hungry with good things (Psalm 107:9, NIV)

So, what was in the email? What was the loaf of steaming warm bread that God wanted to deliver to me so urgently in the form of words? Well, wouldn't you know it: The email was about fasting!

I reiterate, my friend did not know I was fasting, but in this email he had been led to tell me about a difficult fast he'd done, and how there was evidence that fast protected him from later attacks by the enemy. The crux of the email was that fasting had afforded him protection.

Because of the timing and content of this email, I believe it was a word from God for us. And I think what God wants us to know is that our fast has afforded us protection. It might be protection we never see with our earthly eyes or understand, of course, so perhaps we just have to know it's there.

I personally had never given much thought of that outcome of fasting -- protection -- but what a great reason to fast.

It's always important to check everything against scripture, of course. And there is an example in the Bible of a corporate fast bringing protection. It's in the book of Esther, where Queen Esther asked the Jews in her city to fast for protection, and that protection does come following their fast:

Go, gather all the Jews who are present in Shushan and fast for me; neither eat nor drink for three days night or day. My maids and I will fast likewise. And so I will go to the king, which is against the law; and if I perish, I perish! (Esther 4:16, NKJV)

So it was, when the king saw Queen Esther standing in the court, that she found favor in his sight, and the king held out to Esther the golden scepter that was in his hand. Then Esther went near and touched the top of the scepter. (Esther, 5:2, NKJV)

So, our word to take to heart and believe today is this: Our SUM corporate fast has afforded us protection. There is a massive battle in our lives. That we know. And in some form or other the Lord has decreed, "Do not touch, do not touch, my anointed." I thank him for that.

SUMites, I have another insight about our fast too that I received this morning in my prayer time. So I will share that on Wednesday.