A Child of an Unequally Yoked Marriage: Part One

We're privileged today to have a guest post from fellow SUMite, Betty Higginbotham. Betty is going to share her testimony of growing up in an unequally yoked home - And, wow, what a testimony.

The testimony will be in two parts -- Part one today, and part two on Wednesday. Now, over to Betty -- 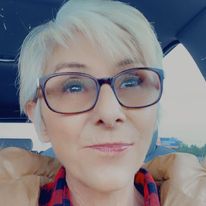 "First I want everyone to understand what you see is not what will be. It will be what God says. Nothing less. Never ever stop praying for your children. Never give up and ALWAYS cover them in the blood of Jesus. As I tell my story of a child growing up in an unequally yoked marriage, pay attention to things that did not happen. I'll explain later.

I was the youngest daughter of five, born to a Spirit-filled praying mother. One who never lied to me and always told me basic need-to-know details of what was happening in the spirit realm of my life. My father was as good as gold. A wonderful man who did whatever it took to make sure his family was fed. Until he drank. He was an alcoholic. It took over most of his very being. He tried hard to fight his personal demons to no avail, he always lost. He would curse God. He was abusive to my mother but for some reason I was protected.

As a very little girl he would take me to bars. Back then it wasn't uncommon. I would drink cokes and eat chips while he visited and flirted. Mother would let me go for two reasons. 1. He came home earlier than normal. 2. He wouldn't drink whiskey thus no physical harm to her would be done. She told me one time "I always cover you in the blood." I quickly learned to do as Mom says, do as Dad says, do as sis says and just keep everyone pleased. It’ll be ok then. So I became a people pleaser.

I remember when I was around 8 years old, I must have passed out, unresponsive. I was taken to the hospital, and tests were run to find nothing. When I woke and Mother and I were leaving she looked me in the eyes, saying: "They are battling for your life but satan can't have you".

Mother always took me to church. She was so faithful to God and his house. When I was 12 years old I received the gift of the Holy Spirit.

I was in bed asleep one night, my bed facing two windows on each side of one wall with a box fan in the left window. A very real greyish/green image crawled through my window and fan, touching and shaking my right big toe speaking to me saying "Get up! Get up Betty! Come with me". I sprung up standing on my bed shouting "Rebuke! In the name of Jesus. Now go!" It quickly fled. My mother standing in the doorway said "do you know what you did?" I answered yes. This is where the real battle begins.

At the age of 14 we finally left my father, moving states away, in with my oldest sister and her family. At this point I felt I belonged nowhere. On either side. I was quickly introduced to drugs and alcohol for myself. It escalated so fast. My 'friends' did it so here I was, pleasing them by joining in. This new introduction led to a date rape by my boyfriend. This was before date rape was a spoken thing. He broke up with me after that. I tried overdosing on my mother’s pills. In the ER they pumped my stomach to find nothing. Not one piece of evidence that I had just swallowed over a hundred little pills. (See what God did there?)

I moved back to my home state in with a friend and her family just before age 15 and rekindled a somewhat relationship with my father. It was ok. This family protected me from much of his alcoholism.

At age 18 I met the man I would marry. Still a people pleaser, I forgot everything to create a life with him. With a stepdaughter and three of our own we had a beautiful unsaved family" ...

That's where we pause the story, and Betty will continue on Wednesday.

Hi. I am Betty Higginbotham from Southwest Louisiana where I work as a geriatric nurse. I have been a believer all my life but I have known Christ for the last 10 years. I am 53 years old and have been married for 34 years with 4 beautiful daughters.