Don't Let Anyone Steal Your Crown 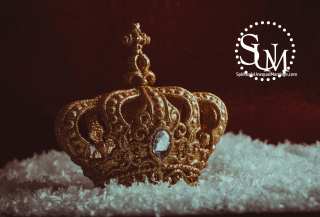 I'm on holiday at the moment in England, where I've been visiting my parents in my home town (Reading), and attending my brother's wedding. I have one more week here before flying back to New Zealand. It's been special to be with my family.

I am finishing off this post with my Mum pottering in the next room. That's nice huh!

Today I had a catch-phrase I wanted to share -- It's something that we can speak out when feeling battered by others' unbelief. The catch-phrase is this:

I'm not going to let anyone steal my crown!

Perhaps we can even take a moment to speak that out right now, in fact, before continuing to read? Here we go: I'm not going to let anyone steal my crown!

The back story to that phrase is this:

I know there are some here who became unequally yoked because their spouse used to be a Christian, but then lost their faith. In many of those cases your spouse's faith was real, even vibrant, but now that same spouse lives in unbelief. You now hear from their mouth all the many reasons they choose not to believe.

I know a little of what's that like as I used to work with a man who lost his faith, having previously been on fire for Jesus. This man was a clever man, and he would share with me on many occasions the various reasons why he had chosen to walk away from Christianity. After spending time with this man I would often feel embattled.

God would show me all over again that Christianity is true. Nevertheless that man's voice was in my ear on a regular basis. So, which voice was going to be louder: God's or this man's?

A friend who was very strong in his faith knew I had this challenge and decided to send me some words of wisdom. They were such on-point words that I wrote them down at the time. I was greatly helped by them, and discovered them again this week so thought I would share them here.

Perhaps these words are especially for you today if you're one of those whose spouse lost his/her faith. Here goes:

"Don't let anyone steal your crown.

You sit in the heavenly realms with the Lord (Ephesians 2:6); you've been lifted. So it is that you remember the incredible position of authority and respect you have right now, and in the next life as well, even if some people have forgotten their position or have chosen to lower themselves after having once been elevated."

Amen to that. For the Bible does speak of us inheriting a crown, or crowns, and phew it will be quite the inheritance. We must hold onto it like crazy, not letting the unbelief of another person steal it from us.

In that spirit, then, let's look at the scriptures about the crown that is laid up for us:

And when the Chief Shepherd appears, you will receive the crown of glory that will never fade away (1 Peter 5:4, NIV).

Now there is in store for me the crown of righteousness, which the Lord, the righteous Judge, will award to me on that day—and not only to me, but also to all who have longed for his appearing (2 Timothy 4:8, NIV).

Be faithful, even to the point of death, and I will give you life as your victor’s crown (Revelation 2:10, ESV).

Blessed is the one who perseveres under trial because, having stood the test, that person will receive the crown of life that the Lord has promised to those who love him (James 1:12, NIV).

If you would like prayer for perseverance today -- That is, if you are feeling battered by the unbelief of those around you and need prayer to keep going, leave a note in the comments and we'll pray for you.