Sweet Gifts for a Grandmother's Faith 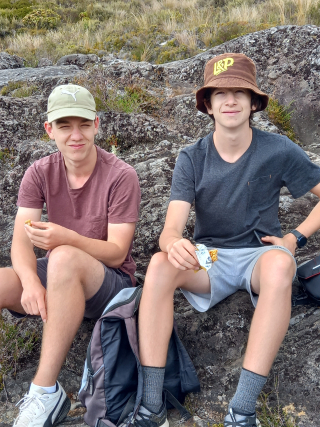 Is it like that for many of you, I wonder?

Here's a pic of my precious two boys -- Travis and Miles. They are 17 and 16 and, like their Dad, they have not yet had a point in their life where they've said "Yes, I give my life to Jesus". That's not to say they haven't been exposed: Both boys were raised with me talking about God a lot. I would tell them God stories, I would pray for them, and I did take them to church for periods of time, but church never gelled for them and that part was a real struggle for me.

In his earlier years, my oldest used to express unbelief, or would challenge the existence of God. He's a very concrete person, geared around what he can see and touch directly. Those expressions of unbelief have now stopped, though - Interesting.

My youngest, meanwhile, joined church of his own volition a year ago too. THAT was amazing, and I shared that story here. He and I now attend church together, just the two of us. Still, with him I'm watching and wondering where he sits with it all.

Well, two weeks ago something very special happened, because I saw a tiny shift happen separately for each boy in the space of one weekend. Glimmers of change. 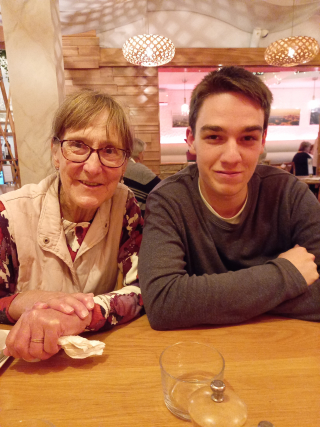 I'll start with Travis. My Mum was visiting us and she and I happened to have the chance to go out for dinner on our own with Travis. It was a treat for her and I. As parents of teens know, it's nice to have the excuse to spend time talking with a willing teenager and we chatted about all sorts. Here's a nice photo from that night.

Well, partway through the evening, we started talking about Travis's friends and where they stand in their beliefs about God. He said, very casually, 'Yes, they've told me they don't believe in God, and I've told them I do believe in God.'

I've told them I believe in God.

Well that made me smile because I have never before heard him say that. And, when someone makes a statement like that it's a clear step forward to say 'My heart is open'.

Sunday rolled around, then, and my Mum and I drove with Miles (my youngest) to church. It was the first time my Mum had attended our church and she was looking forward to it.

Our church doesn't do communion often, but they happened to have it that day. The leader said, "If you have received Jesus into your heart, then do come up and take some bread and wine". Miles was sitting on the other side of the room to us with one of his friends. I took a peek over thinking 'will he go?' and sure enough up he got, walked to the table, and took the bread and wine. He then went and sat down, and as I peeked over I could see he had his eyes closed, reflecting. It's the first time I've seen him take communion.

Like the statement his brother made - 'I believe in God' - Communion is powerful. It is the finest of feasts, and a way we can enter Him, by eating his body and drinking his blood. That day Miles took a step in the Heavenlies by receiving communion (Jesus). 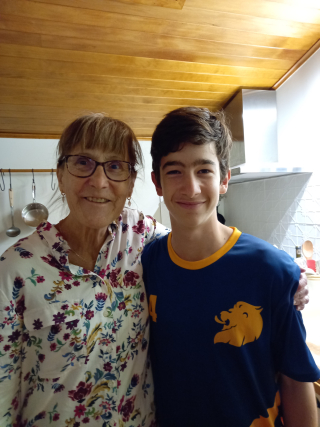 Later, my Mum and I were alone and I turned to her --

"Did you notice what Travis said in the restaurant?"

"Oh yes, I was going to say the same to you!" Her eyes sparkled back at me.

"And did you notice Miles took communion?"

She and I grinned broadly.

My Mum has been a woman of faith since the 1970s, never wavering, never backsliding, and praying constantly for her family. It seemed somehow providential that she was there to witness those two new signs that my boys are getting there, that is, getting towards that momentous decision where they will say --

Thanks for reading along today. For those of you who have kids, how old are they and how are things going faith-wise?