My friends, today it is Resurrection Sunday, and along with the wider Body of Christ around the world we're celebrating this wonderful, wonderful event. 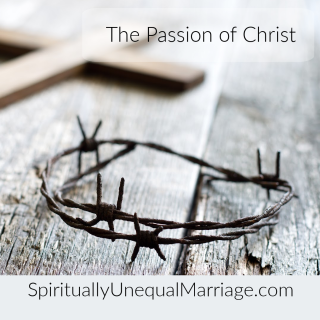 It's funny to think about how that group of people in first-century Jerusalem (e.g., the disciples) were so normal ... And yet what they experienced that day was completely mind-blowing.

That day, that Sunday of the Resurrection, the women went to the tomb to find a stone rolled away, and men dressed in white -- Angels. One of the women, Mary Magdalene, even saw Jesus with her own eyes. Was she crazy??

Peter and John raced to the tomb to find it was indeed empty. The burial garments were lying in a pile, including the body's head covering neatly folded in a corner. What on earth had happened?

Two men were walking on a road to Emmaeus and Jesus appeared to them to explain the scriptures and what had just happened. As soon as they recognized him he vanished from their sight. "Didn't our hearts burn within us?" They said afterwards, trying to debrief with each other.

And finally, the grieving disciples were in a locked room hiding from the Jews when suddenly their beloved Master appeared from the dead in front of them! They nearly fainted with shock, but then got to touch his side, saw his hands, and sat back in awe, hearts pounding.

That was the immediate reality, though several of these people might have wondered if it was real. The Bible says many doubted, and it's not surprising. It was an extraordinary day which they would never forget.

What they couldn't possibly have imagined, however, is what would happen to the world after that. That, to me, is as big a miracle. That resurrection power swept through the world, beginning in Jerusalem, and changed individual life after individual life, eventually reaching yours and mine. It first touched people in the places where the twelve apostles took the Gospel, and then continuing to explode like an atom bomb from generation to generation, like a powerful domino effect. Signs and wonders often accompanied the message, as did a lot of prayer behind the scenes by saints past and present.

The resurrection message of Jesus had the power to spread without compulsion or force and it changed whole nations. Every authentic conversion that occurred did so by that same resurrection power that lifted Jesus from the dead.

That you may know what is the hope of His calling, what are the riches of the glory of His inheritance in the saints, and what is the exceeding greatness of His power toward us who believe, according to the working of His mighty power which He worked in Christ when He raised Him from the dead .. (Ephesians 1:18-19, NKJV)

Today almost one third of the world's population calls themselves Christian, and the resurrection power of Jesus Christ continues to touch individual lives, one after another.

And there are also many other things that Jesus did, which if they were written one by one, I suppose that even the world itself could not contain the books that would be written. Amen. (John 21:25, NKJV)

The above verse is the very last verse of the four Gospels. Though it is speaking of all the things Jesus did in first-century Israel, it feels to me like a prophecy too. Indeed, the world truly cannot contain the number of the things that could be written about what Jesus has done ever since the Resurrection. Testimonies of changed lives are now as numerous as the grains of sand on the seashore.

What do we do with that? Well, I'd say we must stand on the fact that the power of the resurrection is such a powerful force that it changed our world. If that is the case it can change our home too.

And that brings us to the end of our time of commemorating the passion of Christ. Dear SUMites, I hope you have a meaningful day and let's celebrate the Resurrection today with all our hearts, souls, minds, and strength.