Home Who We Are Salvation Stories Significant Resources Meet The Team The SUM Shop Lynn Donovan Ministries New Here? Video Teaching
Do you know what happens in the Spiritual realm when we worship?
A Carter Update And Prayer Request

A Quick Hello on Our Day of Worship 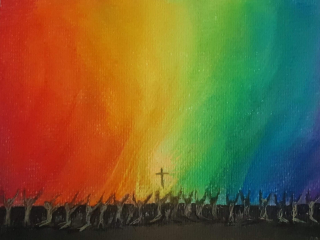 As I write, it's late night here in New Zealand, and somewhere over the Pacific ocean, three from our community are kicking us off. What a lovely thought!

Now, don't worry if you didn't sign up -- Just jump in and worship any time during this day. You can look at the list below to see who else from our community is worshipping along with you and know that you are joined by at least one other.

The picture accompanying this blog post was sent to me today by one of our UK SUMites, Libby Finan. She told me she had received this picture of worship from the Lord last year and had then drawn it. She had just remembered it while thinking about today. She said:

I saw how our worship ascends to heaven like rainbow colored vapors.

His word says that rivers of living water will flow from our inner being. I saw the light and heat of the Holy Spirit causing a reaction within us, and as we worship it evaporates and rises to heaven like vapors. It was as though our worship became visible to me as it is seen in the spiritual realm, and it was stunning! The worship was rainbow colored -- Each person brought a unique shade of color and they merged to form a beautiful rainbow symphony of worship to our King.

Then she gave this scripture, which perfectly captured what we're doing:

"Let my prayer be as the evening sacrifice that burns like fragrant incense, rising as my offering to you as I lift up my hands in surrendered worship!" Psalms 142:2 (TPT)

Dear friends, I hope that gives you encouragement as you worship. As Lynn said in her last post, hop into the comments and share anything from your worship. Photos, anything. And thank you, Libby, for this beautiful picture and words.