Home Who We Are Salvation Stories Significant Resources Meet The Team The SUM Shop Lynn Donovan Ministries New Here? Video Teaching
In the Moment
When Your Spiritual Mismatch Takes an Emotional Toll

This week one of our dear SUMites, Alissa Berglund, sent us the following story. This was one of the salvation testimonies we heard of a few weeks ago behind the scenes, and since then Alissa has been writing it up, knowing just how much it will encourage us all. We're so happy for her, and thank you, Alissa, for sharing it! 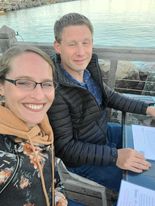 My story is typical, I was raised in a Christian home, accepted Christ early on, started out in my prodigal years in my late teens, married my pre-believing husband in my 20's (hoping he was, but knowing deep down he wasn't saved), had kids, and shortly after God called me back to him. In the fall of 2014, I returned to my faith, and this is where I start my story of being spiritually mis-matched.

After returning to Christ, I tried in my own strength to save my husband. But my efforts were futile, created strife and life got hard fast. Andy didn't want to hear about my faith and in-fact he told me he was agnostic. I had never felt lonelier and more abandoned in what had previously a strong and close marriage. Despite Andy's resistance, he still came to church with me and the kids, his reasoning... "If my family is going, then that's where I want to be". I began to pray and believe Romans 10:17 "So faith comes from hearing, that is, hearing the Good News about Christ". I believed that one day this verse would come true for him.

In 2016 I discovered the SUM community, and it was balm to my soul!! Finally, a group of people who knew what I was going through. I had church friends that tried to sympathize, but unless you are walking through it you just don't know, am I right??

There were moments were Andy engaged more with God and I thought, this it! He's going to put his hand up during an alter call... and then he wouldn't. But despite that, I kept praying, and putting my hope in Jesus that at the perfect time he would awaken Andy and he would believe.

In 2019 I attended the SUM conference hosted by Lynn. I had the most encouraging time, met so many women who filled my cup. God did amazing things, and I came home inspired again to reach Andy, and then we entered the election season, the pandemic, and the civil unrest in our community. Life turned up-side-down.

Going into 2020 and now 2021, between discussions on politics, racial tensions, the pandemic, trying to distance learn our kids, and just hold it all together Andy's heart was gripped by fear and despair, not knowing what truth was or how to find it. It made my husband even harder to reach for Jesus. We talked at-length about how it was that I was able to stay centered and confident in what I knew truth to be, but it always came back to Jesus, and he didn't like that answer.

In late spring of 2021 Andy really started to dig for truth on has favorite platform Tik-Tok. I started to pray over his media asking God to have him "stumble" upon Christian influencers that might cause him to question who Jesus is. Lo and behold it started to happen. Our conversations began to be different we started taking more about who Jesus was, but he still was operating in fear.

At no point did I have any inkling that God was doing something in his heart, but on June 12, 2021, while driving to our family fishing trip Andy gave his heart to Jesus in the car. I of course was driving separately and had no idea what was transpiring until we pulled over for a pit-stop and he pulled me into a hug and told me he had given his heart to the Lord. After nearly 18 years of marriage, and the last 7 being some of the hardest and loneliest God in his perfect timing revealed himself to Andy and he was saved.

It wasn’t an alter call or a big ado… In Andy’s words God “woke him up” and once he saw the truth, he couldn’t deny it.

I am here to encourage you, that God IS doing things in our spouse’s heart that you can’t even fathom. He is a way-maker, miracle worker…. Even when we can’t see it.

As I’ve walked this road for so long as a SUM, God is now working to re-define my purpose and identity as a wife of a believer. Do not give up… If God called Noah to build a boat for over 100 years, he is calling you to pray and believe for your spouse for as long as it takes.

I'm Alissa Berglund from Lakeville Minnesota. My husband Andy and I have been married nearly 18 years and we have two boys, James and Micah who are 9 and 8 years old.