"Are You Kicking Against the Goads?" 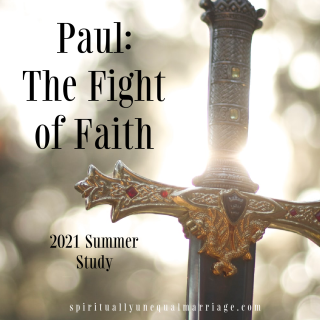 I'm joining Ann and Lynn today to talk about the life of Paul for our Summer Bible Study.

When I think of my favorite story from the life of Paul, I immediately think of Paul’s conversion experience. Ann has already written about Paul's powerful testimony of that experience when he stood before King Agrippa in Acts 26.

Today, I want to take us back to where it all started in Acts 9 for the words of Jesus:

"Saul, Saul, why are you persecuting Me?

It is hard for you to kick against the GOADS”.

I kid you not, every time I have read this scripture over the years, my mind races back to the farm I grew up on in Georgia. Not only did my daddy grow peanuts like most farmers do in Georgia, he had a large herd of cattle and hogs also. Once a month, Daddy would load up about 50 hogs that he had been fattening to take to the market to sell. He’d back his big truck up to the fence and line it up with the “hog shoot.” For all of you city folks, a hog shoot is a narrow wooden passage that the hogs walk up to enter the truck from the field.

Now, the old hogs did not “gracefully” walk up the shoot. They had to have a little prodding. Daddy had just the thing to get them going in the direction of the back of his truck – "a hot stick." This was a battery operated device that gave them an electric shot in their rear that guided them up the narrow passage way into the back of the truck. Poor hogs – they had no choice, but to enter the truck.  In Paul's day, Daddy's "hot stick" was referred to as goads, which were typically made from slender pieces of timber, blunt on one end and pointed on the other to get an animal moving in the right direction.

Now, think about this goad with me in terms of the power of the Holy Spirit moving upon Paul on the road to Damascus.  Here we see a man who was actually on his way to kill more Christians, and boom!  The light shone upon him, and down he went.  I see two things happening at that time. Not only did he accept Jesus, but he accepted the call of God upon his life.

What can we learn from Paul's salvation experience?

In our SUM marriage, we often cry out, "How long, Lord, how long? I don't see any changes." As with Paul, we may not see a warming up to the gospel. And with that I want to share with you a prophetic word I have received about my own spouse. "That rebellious tongue will cease; it will happen so quickly, it will be the working of a miracle." May that word encourage you, too.

My faithful SUM friends, one way or the other, God’s guiding hands will get our loved-ones in the back of His pickup truck just like my Daddy did his hogs. It may take a hot stick to give him/her a shot in the rear to guide him, but He has heard our prayers, and has them going up "the salvation shoot." And, as Lynn said in Winning Him Without Words, “we get to have a front row seat watching the action take place."

What we can learn about God's calling on Paul's life in accepting our own calling?

#1 God Meets Us Where We Are

Paul was on a mission to stop the spread of Christianity. Instead, God met Paul right where he was and used him to help Christianity spread around the world. No matter what sin we have committed, no matter how un-equipped we feel we are, God will meet us where we are to fulfill that call.

#2 God Only Gives Us The Next Step, Not The Whole Plan

When Paul asked Jesus what he would have him do, Jesus didn’t say, “Brother Paul, you are going on several missionary trips for me, you are going to write over half the New Testament, and BTW, Paul, you’ll be beheaded, and die as a martyr for the kingdom of God."  No, God only gave him the next step, “Go into the city, and you will be told what you must do.”  (Acts 9:6)

As Paul stood before King Agrippa giving his testimony, he said, “I was not disobedient unto the heavenly vision God gave me.”  (Acts 26:19)  And folks, all we have to do is read Paul's story to see how he faithfully carried out that vision no matter what came his way: storms, beatings, shipwrecks, imprisonment, in danger from bandits and from his own countrymen. and at times, he went hungry and naked. (2 Corinthians 10)

Paul gives me courage to "keep up the fight of faith." And above all, may I always remember:

"It is hard to kick against the GOADS.

Just go ahead and get in the back of God's pick-up truck!"