Home Who We Are Salvation Stories Significant Resources Meet The Team The SUM Shop Lynn Donovan Ministries New Here? Video Teaching
Another Spouse Gets Baptized!
I see a cloud the size of a man's hand

And ... Another Spouse's Salvation! 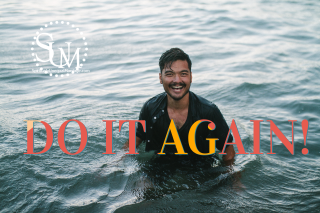 It seems that it's 'miracle week' here at SUM. How amazing God is, and I can't wait to share with you this next thing that happened this past Friday after I last posted on here. All I can say is that God is lavish, full of marvels, and sometimes he does things with a little fanfare -- Just so that we know it is him.

Last Friday I shared that one of our SUMite readers' husbands had got baptized. If you missed that you can read it here.  The photo I used for that post was this one here -- I got this photo from the internet, as I usually do, but I loved the happy smile on this man's face as he's in the water, and I thought 'That's what it looks like for a spouse to be baptized'.

Anyway, as you'll see I have included that same photo again today, this time with the words 'Do it Again' -- For that is what today's post celebrates.

When I uploaded that post last Friday, I scheduled it to go live for a few hours later. Well, in the few hours between it being uploaded and going live, another SUMite messaged me (not knowing what I'd uploaded). In her message she too told me that her husband had given his life to Jesus! It had happened a month earlier, she said, and she was now getting used to having a believing husband.

I know this particular SUMite. She lives in America, has followed this ministry for a number of years, and from the few conversations we've had in the past I know for sure what a miracle this is. If she feels ready to share it publicly, we'll look forward to that; but often people don't share immediately. What I can say is this one 'felt impossible' - like they all do - and yet it happened.

Two spouse-conversion testimonies in the space of 24 hours. I don't know about you, but I'm pinching myself ((Big smiles)). So much of what we do, what we fight for, is about this. Yes, it's about holding on to our own faith -- But it is also about theirs: The spouses.

So, friends, we'll keep on watching with interest and believing that nothing is impossible. I'll keep this one short and sweet, but I'm praying about what's next.