The Truth about Menacing Giants 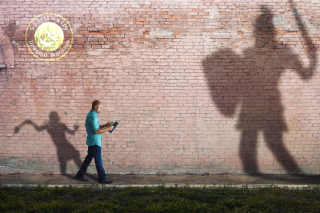 We're continuing today with our conversation about 'fighting giants'. Yes, those menacing things that present a huge challenge for us, whether it's sickness, financial trouble, fear of our spouse's unbelief, or any other 'very difficult battle'.

Being human, a giant will naturally look much bigger than us and make us quake in our boots:

And a champion went out from the camp of the Philistines, named Goliath, from Gath, whose height was six cubits and a span. He had a bronze helmet on his head, and he was armed with a coat of mail, and the weight of the coat was five thousand shekels of bronze. And he had bronze armor on his legs and a bronze javelin between his shoulders. Now the staff of his spear was like a weaver's beam, and his iron spearhead weighed six hundred shekels; and a shield-bearer went before him. (1 Samuel 17:4-7, NKJV)

From my internet research, six cubits and a span is apparently 9 foot 9 inches. Goliath was a whopping beast! And it's all very specific: Every part of him is menacing, from his spear, to his leg armor, to his coat. The overall impression? 'AGGH!'

In the same way, if we have a giant we're battling we can spend a lot of time looking at every part of that giant and deciding it is truly threatening. 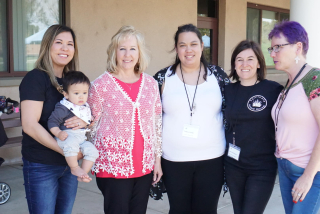 Right then. But would you like to hear a 'giant' story? Because God gave us one at our last SUM conference - It's a story I've only just remembered today:

Two years ago you may remember we held a conference in California. Here's a photo of part of our team at the time. I can certainly share that each of these valiant women have giants they fight, none of us are alone. And they do it so well!

After the event I was sat on Lynn's couch and she prayed for me, with Tiffany's arm round me. It was a sweet moment.

Now, compared to others I'm short -- The opposite of a giant -- Which is an important part this story. I used to think I was 5 foot 3 but I remeasured recently and seem to have shrunk. Anyway, at that time '5-foot-3' is what I thought I was.

While praying, Lynn gave me a word. It was this: "I hear God say you're a 15-foot giant in the spirit realm." She paused, smiling ... "Does that mean anything to you?" It didn't but, hey, I liked it. Later that night I wrote it in my journal and on the plane home I asked God: "Why 15 feet?" It occurred to me then to calculate the difference between 5-foot-3 and 15 feet. And so I wrote down: 9 foot 9 inches.

Well, blow me down, that's the height of Goliath. And so it turns out I'm bigger than Goliath -- Because of Jesus. So are you, SUMites, bigger than the giant you're fighting. In David's words:

"Who is this uncircumcised Philistine, that he should defy the armies of the living God? (1 Samuel 17:26, NKJV)

There's one more giant story I want to share, and I hope this one encourages you. I keep a record of my days with God by journalling. Anyway, a few days before I got smashed by this sickness God gave me a vision of the spiritual giant that I was about to battle. I didn't understand it at the time, but found it in my journal later and went "Ohh, that's interesting!" It was as if God was saying: "This is what you're about to fight and this is how you need to see it."

Now, I can tell you this giant did not look anything like Goliath. He -- Actually, it was an 'it' -- did look tall, yes, but that was the only similarity. It was skinny, grey, wispy, miserable, pathetic, and weak. Not in any way scary or intimidating.

In other words, God was saying: "This thing is not as scary as you think."

In the last post I said that I was going to share two questions we can ask God about any given giant we're fighting. Well, my writing took a different turn. So there's just one question instead and it's this:

Lord, show me how I should see this giant?

Whew, I feel stronger already just writing this. I hope you do too. Feel free to share thoughts in the comments, and let's keep chatting about this topic of giants!