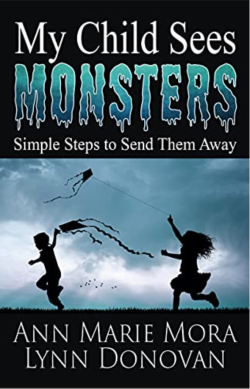 Now that Lynn's new book My Child Sees Monsters is available, I am excited to share a testimony from the Carter Crew.

For the last several years, my daughter (who will turn 7 next month) has had constant bad dreams. She would wake up in the middle of the night and climb into bed with my husband and I. When I would ask her what she dreamt about, she would use the word monsters. Sometimes they would take the form of the Grinch, the live version with Jim Carrey terrified her. Sometimes they would take the form of bad guys wanting to hurt our family. Like I was taught in my childhood, I would just brush it off as "nothing" and try to assure her that there was nothing to worry about.

Around that time, Lynn posted a series on Children and Night Terrors (click below to read or re-read). I was amazed to see how she had helped her daughter Caitie navigate through it.

This was the beginning of my eyes being opened to the spiritual realm and the attack on my children. Sometime after this series, my daughter told me that sometimes she felt like someone was following her around. When she would turn around to look, there would be nothing there. I asked her if she felt like whatever was following her around was good or bad. She said bad. At 4 or 5 years old I began, as best and as delicate as I could, to talk to her about the spiritual realm.

Let me tell you, speaking about demons to my sweet and innocent little girl was difficult. However, looking back I am so glad that I did.

Let's fast forward to 2021. I got the chance to read My Child Sees Monsters in March for an endorsement. It was even more eye opening than the posts I had read a few years prior. There is so much helpful information that I don't have time to flesh it out here. I highly recommend buying the book. If not for you, than for other parents with children at home. You can order it here: My Child Sees Monsters. Both Lynn and Ann Marie Mora were so great at making things simple and easy to understand. I will be reading it again and again and again!

During the time of reading the book, I had also just moved into my in-laws house. My son for the first time in his life, was scared to be in his room alone with the door shut. I know part of the issue was having an open door policy in our old home. They had gotten used to me always having their doors open. Now that they are older and we are sharing the living space, they are having a hard time adjusting to closed doors.

However, my son legitimately seemed terrified to be in this room. He would have a meltdown when we would even mention that it was bedtime. He would always yell SCARY when we would turn the lights off for bed and shut the door. Both my husband and I knew that this was very uncharacteristic of my son. Reading this book helped me to see that I was not going crazy in thinking something was wrong. I was able to see what I as a parent could do to help my son. Simple words like "it's okay, there is nothing to be afraid of" was not enough.

I am able to better see the authority as a believer and parent that I have. I am able to take that authority and stand firm as a guard for my children. I am able to use these simple steps to cleanse and break the strongholds and attacks.

I've gone on a little long. I want to continue this on Friday with more of the Carter Crew testimony. My Child Sees Monsters does not merely speak on the demonic. In fact that is a tiny glimpse, as it should be. We have more power and all the authority over the forces of darkness because of Jesus Christ and His precious blood. Hallelujah! The best part is yet to come.

Love and blessings! See you in the comments.