The Curious Move of Jesus in My Home 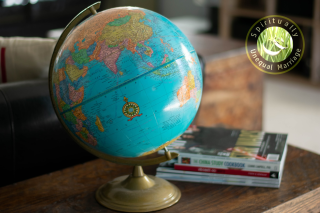 When you're driving in the dark it's a great place to talk to a teen. With both sets of eyes fixed on the road nothing too intense is going on. That's probably how a teenage boy likes it, and it's where my son and I found ourselves last night as we drove home from his third time at youth group.

(Praise God! If you haven't read it, he has recently joined in at church and the story is here.)

My friends, Miles is loving youth group -- Really loving it -- and I am pinching myself at this turn of events. He laughs at that. He knows I’m excited even though I’m trying to keep it all cool.

Last night in the car, he and I talked about the idea that God might move at a specific time in someone’s life. We talked about his grandparents, who each became Christian in their twenties. We also talked about Bryce and me. Miles has never seen me be anything but fervent, but I told him I used to be the opposite.

Has God moved now, with this whole youth group thing? Well, something curious happened a few weeks earlier. And this 'something' is getting me thinking. I believe the following incident was God's way of confirming that this move is His move:

A few weeks ago, Miles came downstairs for breakfast, scratching his head.

“Mum? Umm… I woke up and my globe lamp was on the floor by my bed. Did you move it?”

We asked Travis (his big brother) and we asked Bryce. Did any of them move the lamp? Nope. They didn’t. None of us moved it. So, somehow this lamp seemed to have moved itself from his bedside table to the floor.

Now, it’s possible he sat up and in a sleep-walking state moved the lamp. But the thing is it sits at the back of the table, so he would have had to lift it over stuff.  Surely something would have been knocked? Further, the lamp is touch-sensitive in every part, so the minute you touch any part it turns on. If Miles had moved the lamp, it would have been on. But it wasn’t. There it sat as he woke: On the floor, right where his feet touch the ground.

We all found this odd. And, of course, I had a little sneaky thought: Is God doing something fun here?

A few days later, Miles and I were chatting about the lamp and a thought came:

“Oh Miles, the Bible says Jesus is the light of the world. And His word is a lamp to your feet!“

At that, my lovely boy gave me a grin. He seemed to think that was cool. I, meanwhile, quietly thought to myself, "That is super cool. I'll assume that was you, Lord!"

Jesus is the Light of the World. And He has moved in this boy's life.

His Word is now a lamp to my son’s feet.

It was only a few weeks later that Jesus moved. In my son’s life. And he became part of Church.

"Then Jesus spoke to them again, saying, "I am the light of the world. He who follows Me shall not walk in darkness, but have the light of life." (John 8:12, NKJV)

When God moved in your own life so that you believed, how old were you? And how did God show you he was real? I would love to hear any stories you have of your own move.