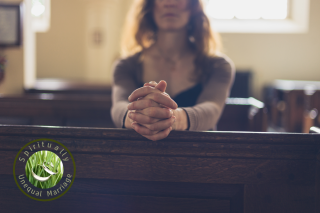 Today I want to chat about one of our topics that is an old favorite: Attending church alone. I type this with a smile, but it's a wry smile. Whether or not we've got into a routine, I think most of us would say that Church-plus-SUM is super tricky!

I shared recently that my little church closed in March. It had about 60 people, and we loved each other. But, just before Christmas two things happened: The numbers plummeted and the pastor and wife lost their vision for it. Not for pastoring, just for that place. It was as if they couldn’t help but let go.

It seemed God was closing a season for us all, so the pastor bravely announced “We are closing. We are so sorry … But now let's transition well.” And he cried his way through the message. What happened in the weeks since, however, is that each family went somewhere different and new things blossomed.

My Dad who is a Christian gave me a word at the time: “Whatever your reasons for joining that church initially, those reasons have now been satisfied. Allow God to do something new.”

And so I am. Happily. But I'm also reflecting on what God took me through in those six years. Because they were pretty impactful.

The day I walked through those church doors -- Well, a converted underground carpark -- I was hugged, welcomed, and felt the presence of the Holy Spirit. Oh, it was wonderful, and of course I couldn’t wait to go each Sunday. But, as you know, with a less enthusiastic spouse it's not so simple:

“Don’t tell me you can’t give it up if I ask you to!” Bryce said to me months later, fearing my absence. I guess he could see my attachment to it, and in his mind I was on my way to becoming a cult-following weirdo. Because of that comment, I became fearful myself. Fearful of what it would do to us. My attendance became sporadic and I miserably stayed home on a Sunday. Often.

“Are you alright?” My pastor asked me one day when I reappeared after about eight weeks. I whimpered back: “I just miss my husband so much …” Tears. And more tears.

He didn't say much. He just looked at me with sympathy. Bryce was the gaping, invisible hole next to me. Crap (can I say that?), this thing was hard. It was hard enough that it's making me cry to type this. That tells me how hard it was.

Time passed and I began to grow a desire to serve. “I’ve offered to go early and help on the door today ..” I said in a deliberately light-hearted voice to Bryce one Sunday. “Seriously?” He raised his eyebrows. “Why do Christians have to do that? Hellooo.” (He mimicked the sing-song voice of a Christian door-greeter, possibly teasing, but possibly not!) Maybe you can smile to read that because you know how this thing goes. But I tell you, my sense of humor had checked out. I was so sensitive to being mocked for my faith by that point, I was over it.

I served in different areas, but sometimes I stepped back. Sometimes I'd say, “I’m sorry – I just can’t … I have to balance it with my family.” Other times I'd say: "This I can do, yes." I followed the Holy Spirit on this one. "Yes? Or no, Lord?"

Six years in all. And by the time this little church closed I can say that, Sunday by Sunday, the whole experience grew me. God grew me, with the help of his team, his church. So, here's where I'm at now:

God is real. Jesus is the Way, the Truth, the Life.

Church is important. And so is my marriage.

Bryce knows the above.

And somehow, these days, we make it work.

So, if you are reading this and struggling with this whole area (gah!), I think I just want to say it’ll be ok. Just keep putting one foot in front of the other, seeking wisdom with each step.

How is church involvement going for you these days? Looking forward to chatting in the comments.