Home Who We Are Salvation Stories Significant Resources Meet The Team The SUM Shop Lynn Donovan Ministries New Here? Video Teaching
It's Okay to Doubt
God's Move in My Family

Introducing Jesus Round the Dinner Table

I lit the candles, put some serene music on, and let the aroma of lamb waft through the house. It was Passover evening, just a couple of weeks ago, and I'd made my family a special meal. 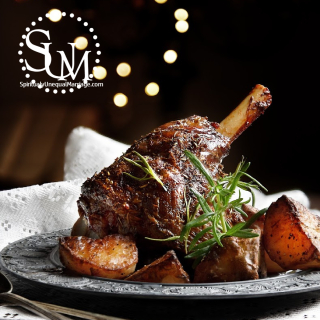 And so my three came to the table. Bryce, Travis (16) and Miles (15). They are pretty amenable to ‘Mum’s’ quirks these days, so Passover dinner? Hey, they humored me.

They do like food. And I'd made some special Jewish cookies for afterwards. So, what with the serene atmosphere and the nice food, it was an evening that felt a little different.

I love the Jewish days and the story they tell. But what was ultimately in my head was this: I want to share Jesus with my teens. To pull out the Bible seems too much for them. To give them a talk about Jesus around the dinner table would feel like a lecture. But what we can do is eat Passover lamb! Because it’s Jewish and has a story attached it's somehow easier.

It tells the story of Jesus right there on our table. The Lamb.

So, back to our meal, here's how it went. There we were, the four of us in our little house, with our lamb and some pita bread (unleavened bread), and we began to chat:

Bryce suddenly starts it off: “What’s the story of Passover, boys? Do you know the story of the ten plagues of Egypt?”

“You know?” I turn to him, surprised. I guess I carry a sense of wishing I'd done better to bring the Bible to my children. Some of us SUMites feel that way, I know. In my case I feel that my kids were a little too old when I turned to Jesus. But perhaps they weren't after all.

Travis says again: “I just know. I know all those Bible stories.”

Mm. Ok then, so we list off the ten plagues in Egypt.

Next we talked about Jesus. We talked about how the lamb in the Egyptian times pointed to Jesus. And he died because of sin. I can't quite remember if that was me who raised it, but I wasn't being pushy. Everyone was tucking into the delicious lamb so it was a friendly affair.

“So now, boys …” I said. “Atheists and Christians differ here. They differ in whether they think there is such a thing as sin …” And then I said one or two more sentences. It was the first time I've ever managed to talk with the boys about the cross.

The boys leave the table, and I’m left with Bryce; who then asks me again about the blood that the Jews smeared on the doorpost (Exodus 12:7-8), and what the link is again with Jesus. I said this:

“I think Jesus works in households.”

“Well, the blood on the doorpost is a household thing.” I said. “And if someone in a household is praying in the name of Jesus, I'd say the rest of the household is spiritual toast” (Smiling). "My parents prayed. And look what happened to me!"

At this point my beloved may have been concerned that he was going to be zapped by God at any moment. He was quick to gulp down his cookie before the obvious question: “There’s free will, though, isn’t there?”

“Yes, there’s free will.” That old chestnut. "But you're still spiritual toast haha!"

This, somehow, seemed to lead into the topic of church.

“I don’t like the singing in church.” he said.

“I know you don’t like the singing." I replied.

It was quite fascinating to me that he was open about Jesus, but Sunday church singing seemed to quickly deter him. Lots of men do not like the singing in church, I think. Was he even concerned that if he got zapped by God he'd have to sing?! Lol..

Anyway, we went on to watch the film 'Mary Magdalene' that evening. Good on the three of them for doing that. And ... When I got up the next morning I found a certain husband cheerfully pottering away to the radio. Not his normal radio station. But Christian radio. He had changed the channel.

(Here I pull a stunned face).

It gets better -- There's more. But I will have to continue with that story next time.

Have a great weekend, everyone!