God's Move in My Family 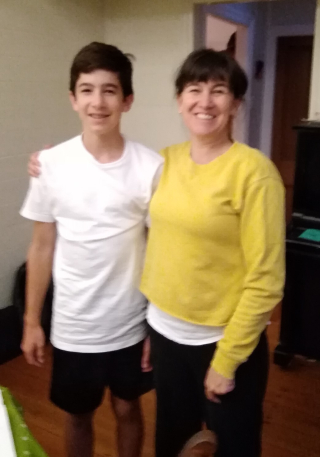 Before I continue to share my story from Passover, I need to tell you about one of those less wondrous 'SUM moments' -- Because it forms the backdrop to what I share next.

It was one of those moments in church. All that happened was I turned around to see some kids having fun as friends. But these kids were the same age as mine. And mine were at home with their Dad. In that moment I descended into a bad space. I felt jealous of every family in that room who looked 'Christian picture-perfect' (Sorry -- I realize that's not good. Transparent post today). Oh dear!

While I've been learning to love, my children have continued to be 'unchurched' and disinterested in faith. Completely disinterested. And that's been hard.

BUT, oh what's just happened these past weeks has taken me by surprise.

“This is the word of the Lord to Zerubbabel: Not by might nor by power, but by My Spirit,’ Says the Lord of hosts. Who are you, O great mountain? Before Zerubbabel you shall become a plain.” (Zechariah 4:6, NKJV).

Just before Passover, my church closed. Rather unconventionally, the pastor felt God wanted us to disband. He made a brave decision to close us, sensing that we were all to be released into somewhere new. I loved my church, but to me it felt a God thing. Certainly interesting!

At the very same time, my son Miles’s best friend Toby's family started going to a new church down the road from our house. My ears pricked up at this news, and I casually said to Miles “If I go to that church, would you go?”

That was the only thing we said.

Well, blow me down, I'd said nothing more, but shortly before Passover Miles spontaneously announced: “Mum, I’m going to youth group tonight, can you drive me over?”

I nearly choked on my biscuit.

(At this point my face took on a stunned expression).

A few days later the next thing happened: “Mum, can I go to Easter Camp?”

Easter camp is a nationwide Christian camp for teens. I couldn’t quite believe what was happening before my eyes … How does a teenage boy, age 15, become interested in church like this?

So we signed him up. I say ‘we’, because Bryce was part of it. And here you may be wondering what his reaction was? The answer: Happy.

The Passover lamb meal came and went, and then the day of camp came around. That morning, I went out and bought Miles a Bible, which I showed Bryce on my return. It was the last thing we got ready, and in the front cover I wrote: To Miles … I stopped. From Mum? My pen hovered. Then, I continued: From Mum and Dad.

Three days he was at camp. I drummed my fingers. The disciples’ three days of waiting were perhaps not too much more suspenseful. Well, ok, their suspense was bigger. But, would Miles be deterred or captivated at this camp? There’s free will. It could go either way.

I drove to pick him up; and there he was, cheerfully playing frisbee with Toby. Chatting with the other teens. We bundled him into the car with all his bags, and began to drive home. But within 200 metres this came:

“Mum, my favorite session was the Holy Spirit session.” And he looked over at me with seriousness in his eyes.

I turned to him, taking my eyes off the road. I put my hand to my heart, and declared: “Oh Miles. I love the Holy Spirit.”

There we sat at the traffic lights, grinning at each other.

Later, he sat at the table -- Bryce on one side, me on the other -- telling Bryce about a healing he'd seen. Bryce nodded, "Some people have the gift of healing .. Don't they Ann?" "They do," I said, "But I think God invites every believer to pursue that gift."

Today's story ends here: This past Sunday, a certain teenager got himself -- quite remarkably -- out of bed early. That day I didn’t go to church on my own. No, I walked through those doors with my handsome son by my side.

And as I write those last few words ... I’m crying.