Home Who We Are Salvation Stories Significant Resources Meet The Team The SUM Shop Lynn Donovan Ministries New Here? Video Teaching
The Power Of A Praying Spouse - Shifting The Atmosphere In Your Home
Monday of Holy Week 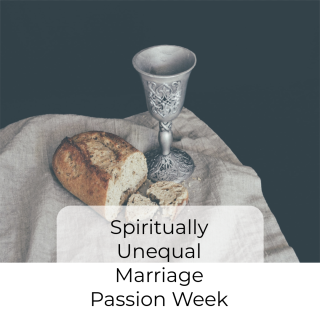 Gang, it’s TRIUMPHANT ENTRY Sunday. Do you know on this day the people of Israel believed their Messiah arrived. AND INDEED HE DID.

This story is very familiar to Christians world-wide, but there is so many nuances and unsaid statements that we completely miss.

Here is one. The disciples and Jesus sat down for a Seder. We call it the last supper. Seder is Hebrew meaning Passover. Did you know that they reclined at the table to eat as a reminder that they were free, not slaves in Egypt. So many, many things have meaning and power.

Did you know there were thousands along a one-mile route into Jerusalem? They were shouting

Hosanna means: SAVE US NOW!

The English spelling of Hoshea-na, means Deliver Us Now. Derived from the Hebrew root as Y’Shua, the Hebrew name of Jesus. The ending -na is something we do not have a translation for in English.

It demands, NOW! Or Please, I pray you. Or Behold!

Literally they were shouting: JESUS NOW!

The palm frond greeting was done on the sixth day of the Feast of Sukkot, welcoming the reigning Messiah to assume the throne in Jerusalem.

Every single person in that crowd knew what was happening and believe in Y’Shua as their Messiah.

Who could use some saving RIGHT NOW?

Hosanna, Our King come NOW! If we don’t cry out the very rock will echo our Savior’s name.

What has Y’shua saved you from and what is He saving you from now? See you in the comments. We have a whole week planned. Meet us here every day. Hugs, Lyn

Luke 19: 37 Then, as He was now drawing near the descent of the Mount of Olives, the whole multitude of the disciples began to rejoice and praise God with a loud voice for all the mighty works they had seen, 38 saying:

“ ‘Blessed is the King who comes in the name of the Lord!’

Peace in heaven and glory in the highest!”

39 And some of the Pharisees called to Him from the crowd, “Teacher, rebuke Your disciples.”

40 But He answered and said to them, “I tell you that if these should keep silent, the stones would immediately cry out.”