Belief vs Unbelief: The Enemy's Influence 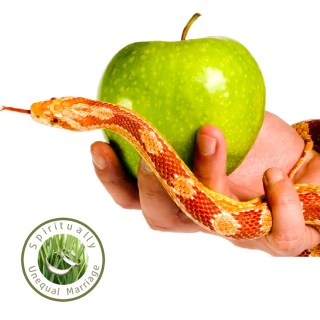 We’re in a series about what goes into belief vs. unbelief. Part one was about free will, and I loved reading your comments. Today I want to talk about another factor: The influence of the demonic.

One of the earliest questions I had for God was, “Is Satan really real?” It was one thing to believe in God, but to believe in Satan and demons was a notch further. It raised so many questions for me.

Apart from scripture, what ultimately led me to believe Satan was real was that a few trusted people I know (seasoned Christians) have encountered demons. Plain and simple. That was a start. I've since had several times of my own where I've heard a demon speak in a particular situation. Interestingly, it’s never scared me.

I deliberately try not to give the devil glory in speaking about a situation. I'd rather talk about what Jesus is doing. However, the fact is that Satan is the god of this world, so privately I take absolute notice of his activities. "I've got my eyes on you -- I know the power of the blood of Jesus, and you're toast!" I say to him behind the scenes. When faced with an unbeliever, then, that’s where I go: What has the enemy done in this person’s life?

Satan, who is the god of this world, has blinded the minds of those who don’t believe. They are unable to see the glorious light of the Good News. They don’t understand this message about the glory of Christ, who is the exact likeness of God. (2 Corinthians 4:4, NLT)

These precious people who currently do not believe are clay in God’s hands. We can work on the assumption that God wants all to be saved (1 Timothy 2:4). What's more, although God has sovereign plans and timings for things, he might have designed someone to be a vessel of honor, and the enemy might be trying to bar the clay.

That is, in fact, a word the Holy Spirit gave me a few weeks ago: The enemy tries to bar the clay.

In this word, barring the clay, for me it brings an image to mind where the enemy is constructing prisons around people to come between them and their Kingdom destiny. To bar them from becoming what they can be: A son or daughter of God.

The Good News, of course, is that Jesus came to destroy the works of the devil (1 John 3:8). Hallelujah! By the power of Jesus's blood, the enemy can shrivel up into a helpless ball and disappear from a situation. IF we learn how to boot him out. Yes, Jesus asks us to cast out demons with the authority he has given us (Mark 16:17). For some seasoned ministers, this is a real calling and they understand the demonic realm and directly come against it. For the rest of us, we need to know that it can happen on the floor of our living rooms as we bind the enemy in our private prayers.

It can look like this, spoken by a humble mother on her knees:

“I know who I am in the Kingdom of Heaven. I take my authority in Jesus’ name and I bind the antichrist spirit in this particular situation.”

Then, we follow by releasing life with our very tongue:

“I pray for this person's intimacy with you Lord!

My friends, that's what our prayers are doing in the Heavenly realm: Breaking those bars open, releasing people from enemy imprisonment. Hallelujah to that!

I’ll pause there; but next time I'm going to talk about the role of God’s plan in a person’s life.

For now, here's a question: How familiar do you feel with this area of praying against the enemy? Have you seen success when you have prayed in that way?