One Big Shift In My Home 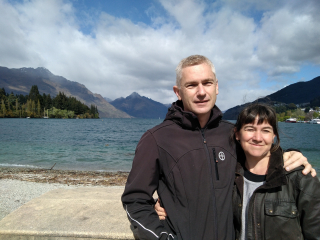 Last week, I mentioned that things had shifted in my home -- Quite a lot, in fact. Well, I want to tell you more about that.

This photo here is of Bryce and me, on a recent holiday. You wouldn't think we'd had such drama, looking at that peaceful photo! We love each other heaps. But, despite that we've had some truly difficult moments on this SUM journey. It's a journey that neither of us asked for.

Somewhere along the way, however, it settled. A peace came into that chasm between us.

I only realized this a few weeks ago. Just before Christmas I went to a hotel for a night alone and had a lot of hours to reflect on the year. It was there that I suddenly realized something:

"Oh! Bryce and I have not had a painful conversation about my faith for a very long time!"

In fact, I struggled to remember the last time we'd had one of those stomach-wrenching conflicts about faith. No wonder I’d managed to be cheery on this SUM site. Somewhere along the way, it had got better. But when and how? It fascinated me. My train of thought continued ... And I realized the moment it changed was just after the worst period of battles I'd had.

It was mid 2019, and I really was embattled -- Spiritually embattled. Sometimes these things are recognizable. Bryce and I had some major conflicts about my church involvement, then two other battles hit in quick succession – Terrible, terrible battles. Amidst them, God actually did say to me: "These are efforts of the enemy, the persecution towards you is coming in a cluster of three, and the enemy is trying to discourage you. You are in my will and you need to keep moving forward."

How helpful it is when God shows us something like that in a battle. It’s not always clear, but this time it was. So I kept stepping forward.

With these battles fresh, I found myself standing over my coffee machine one Sunday morning. I was due to be at church, but as I made my coffee my mind went to my troubles and I began to cry.

Now, a good old cry is a cathartic thing. And that soft little weep began to crank up as the coffee machine whirred away. Before long, you got it, a full-blown wail was coming from my end of the house that made my beloved stop what he was doing and come running … ‘What is it?’ ‘What’s wrong?’ 'Tell me!' ….  Wail. Wail. Wail. Then I let it out:  ‘I can’t – be – a --- Christian any morrrre! It's too hard.’ Tears splashed into the coffee, and now over his shirt.

He stood and hugged me, possibly feeling a bit bad about some of the things we’d gone through the past couple of weeks, and then spoke three, wonderful words:

Just three words. Yes you can. You can be a Christian, Ann.

Sometimes, we don’t realize the significance of what’s just happened. Sometimes a significant moment in our faith life can seem small. But in that hotel room just before Christmas I saw it: When my husband said those three words a whole year and a half ago, he said 'yes' to my faith.

And he’s continued to say yes.

What does this mean for his own decisions about faith? I honestly have no idea. I'm not sure it matters for me to know that. All I know is it's gentler, better, and our marriage is not suffering.

What tickles me a little is that this is certainly not happening anywhere near a church. Which is perfectly fine. I think a few husbands out there are that way inclined, and God gets around these things. 'Church', anyway, is the one sleeping beside him every night who tries to be a good wife.

Do you have tough conversations with your spouse? Has it become gentler over time? It'd be interesting to hear how things are with you. We can be honest, we all understand.