Home Who We Are Salvation Stories Significant Resources Meet The Team The SUM Shop Lynn Donovan Ministries New Here? Video Teaching
Prepping for Our Fast
Fast Day One: What is the Story God Has Written?

I've been so humbled by the response to the 90 day devotion, Kingdom Conversations.

This book is a collection of the words the Lord spoke to me and that I shared in our local newspaper for a few years.

It's similar to Jesus Calling but listening to the Father's voice.

Order a copy and start your new year off by tuning into the Lord's voice for your year.

Over a three-year period, during Lynn’s morning prayer time she would sit quietly and listen as the Lord spoke to her. His voice wasn’t loud or booming, nor a burning bush, but a whisper of familiarity and love that she learned to tune in and perceive. Lynn would read a passage in the Bible, pause, then focus on the Lord’s whispers of love, affirmation, and instruction. His voice offered direction and confirmation and her soul became filled with truth, encouragement, and peace. Each morning Lynn sat readied with her pen poised and she captured the Lord’s voice and wrote down his whispers. She began sharing what she wrote through social media. Thousands would read the devotions. They would post comments that they experienced a new hope, healing, and Godly direction for their current circumstances.

As you read the devotions you will find hope and inspiration as well as encouragement in your faith. You will feel loved and seen by God. Each devotion includes a scripture verse and a prayer of faith. 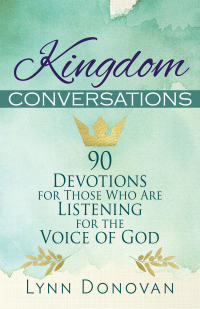 If any of you have read the book, would you share with me which devotion really spoke to you? I'm very curious. Hugs, Lynn

What readers say: What a wonderful way to start the day with God. Each devotion begins with scripture and ends with a prayer. In between it’s like God is speaking to you reminding you of who you are and who you belong to. They are short enough that I haven’t missed a day even on my busiest of mornings. Lynn’s writing has been such a blessing and offers reassurance of God’s love and continuous presence with us, his children.