The Museum of SUM 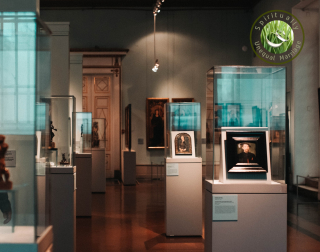 Lately, I've been thinking about how much this blog is a museum full of interesting stories. I wonder if any of you find it so? And, within it there are places where God has answered some of those questions we talked about in our last post. That's what I wanted to share today. Hope you can follow me as we take a little walk through the SUM community's story.

Most of us will know this ministry was started by Lynn as just a little blog. Her time of being spiritually mismatched had only just become easier when God nudged her to start writing publicly about this sensitive topic. This was a huge ask: Would her husband mind? Miraculously, Mike said yes, and fourteen years later here we are. Mike's baptism last year brought us full circle. It is truly one of my favorite stories ever.

This blog, for me, is a treasure trove of God stories. It's a living, breathing parable. A record of God's faithfulness. A story of a little one becoming a thousand (Isaiah 60:22). And, a story of a nation that God loves deeply: The SUM nation.

Last year, I decided to read through the SUM nation's story from the very beginning, starting with Lynn’s maiden post on 1 May 2006. With the spiritual equivalent of museum-curator gloves, I read carefully, post by post, turning the events over. It was as if certain threads were like specific exhibits. Hindsight adds extra insight to some of these threads.

I noticed quite a few things. One part I love is that when Dineen joined soon after the blog started, she instantly brought a strong message about Jericho. She wrote about that a lot. It was as if the Marching Around Jericho book and testimony was foreshadowed in some of her posts. God had a story here that he was writing, and we were all along for the ride.

As I scrolled through, I was keen to read any words from the Holy Spirit that had featured in past posts. By that, I mean directly spoken words or visions that God had given to the leaders for this community. But as I read, from 2006 onwards I could not find much. In 2012 that changed. It was only after October 2012, a personal turning point where Lynn and Dineen each had a deep encounter with the Lord, that they began to receive clearer promises from the Holy Spirit for this community. They would pen these words, turning them into posts. As a reader at that time I recall how strengthening those posts were.

Hearing God speak, and then conveying his words to others, is a huge learning curve. Looking at this blog I can see that God used many ways to teach us to hear his voice. He would usually speak in the still, small whisper, a barely-there conviction; but sometimes he would give Dineen a dream, vision, or a picture; or Lynn would hear a phrase drop into her spirit. It was exciting. They grew in hearing God's voice, and so did we.

Paul said we should use these kinds of words as part of our spiritual battle:

"This charge I commit to you, son Timothy, according to the prophecies previously made concerning you, that by them you may wage the good warfare" (1 Timothy 1:18, NKJV)

These words, then -- words from the Holy Spirit -- are powerful tools. They might include promises and/or direction and strategy, and they can completely change our outlook. Importantly, they can also answer some of those questions we have.

So with this in mind, I’m going to dig out some of these prophetic words that are sitting in our archives, some from as early as 2012. They are words of wisdom and/or prophecy (1 Corinthians 12:8-9), and their purpose is to edify, exhort and comfort us (1 Corinthians 14:3). I would describe them as gifts to help us. So, I'd like to dust them off and take a look at them again. Would you be keen? I’ll start with a couple next week, and then will revisit others here and there over the months as time permits.

In the meantime, I'd love to hear your story: How long have you been reading this blog, and what has been your most memorable post, topic, or series of posts?