This Woman in the Bible is a One-Hit Wonder 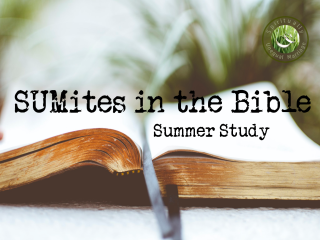 Today I’m going to write something different than what we hinted at in the last post. The Holy Spirit changes our plans sometimes, and I believe he wanted us to look at this Bible character next.

Are you ready to meet her, this next one, this dark horse? Well, here we go: It’s Jael, who hammered a tent peg into the head of Sisera, Israel’s enemy, in the book of Judges.

Let’s read her story in Judges 4:1-24. The setting is Israel and it’s a dark time. It’s like the time we’re in now, actually, in that village life has ceased and the highways are empty (Judges 5:6-7). That’s eerily close to home. The evil King Jabin has oppressed Israel for some time but God’s servants are going into battle against the commander, Sisera, and they know they’ll win.

Now, the prophet Deborah foretells something sharp and curious:

It is unlikely she had any idea what this meant. But it was Jael. She was the one. And she was a SUMite.

Here’s how we know Jael was in a SUM: Scripture says specifically there was peace between the house of Jael’s husband and the evil king. To be fair to her husband, we can understand his choice. Alignment with Canaan seemed the safer option. But Jael’s heart held quiet allegiance to beloved Israel.

Because her husband had aligned his house with the enemy, this made Jael a hidden weapon. My friends, have you ever thought of yourself that way? As a hidden weapon?

Here’s what happened next:

“Sisera fled away on foot to the tent of Jael, the wife of Hebert the Kenite; for there was peace between Jabin king of Hazor and the house of Heber the Kenite.” (Judges 4:17)

Having the army general Sisera arrive would have been crazily intimidating. I'm picturing a big guy with muscles, uniform, and a hard attitude. But Jael was on the winning side and had three humble tools: (1) a bowl of milk, (2) a blanket, and (3) a tent peg.

At this point it's like a riddle: How can a bowl of milk, a blanket and a tent peg win the battle?

Here’s how. Sisera, having been drawn to her home, thinks he can camp there. Jael knows this and goes straight out to ensnare him. He comes in, she gives him the milk, and he’s like a cat with cream. Purrr. Her blanket comes out, and she covers him gently: "Here -- Hide here." THEN the time is right. Her shaking hands reach ... softly, softly ... (oh Lord God, I'm scared) ... for the tent peg and SMASH!! Her blow is targeted and the tent peg drives through his head into the ground.

This woman of power made impact. Through her tools and her courage.

What does the Lord say next? Not only is she blessed among women, but she is most blessed (5:24). Blessed is she among women in tents (v. 24) It’s similar to the words spoken to Mary: ‘Rejoice, highly favoured one, the Lord is with you; blessed are you among women!’ (Luke 1:28).

My friends, this speaks volumes about our strength as SUMites. And perhaps these lessons apply:

I’ll finish with the following song verse about Jael, which celebrates her. There is much to celebrate. My prayer right now is, "Lord, make me like her when I grow up!"

“Most blessed among women is Jael, the wife of Heber the Kenite; Blessed is she among women in tents. He asked for water, she gave milk; She brought out cream in a lordly bowl. She stretched her hand to the tent peg, her right hand to the workmen’s hammer; she pounded Sisera, she pierced his head, she split and struck through his temple. At her feet he sank, he fell, he lay still; at her feet he sank, he fell; where he sank, there he fell dead.” (Judges 5:24-27)

Now for your comments: Do you relate to Jael? What speaks to you in this story today?