About Our Homes...The Heavenly Perspective 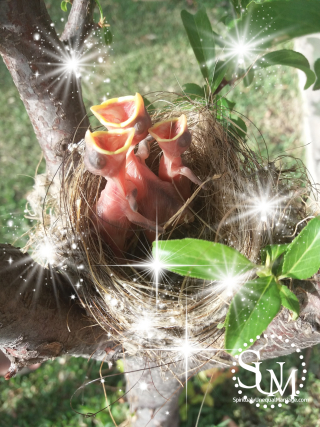 Today I want to share something that God showed me about the homes within this community: the Spiritually Unequal Marriage community. These homes are deeply special to Him, and although they are unconventional in Christian terms, what He showed me is that they 'sit under an open heaven'.

That's a great promise; I'll take it! But what does that mean?

To give you some background, most of you will know that my boys are teens and I have struggled to bring faith to them. Not all of us struggle with that, but some do. For those of us who do, it can feel overwhelming. Overwhelming, that is, until we have one of those moments where we stop and say "Nope, God's got this!"

A couple of days ago, against this backdrop of yet again wondering about my boys' faith, God showed me a picture that illustrated my home. It was pretty cool, and it cheered me along so much that I share it now with a smile.

What I saw was a nest, and inside sat two baby birds. “Those are your two boys,” I felt God say. These two babies had their mouths wide open, waiting to be filled.

The nest didn’t look a plain brown nest. Instead it had heavenly sparkles around it, within it, and above it. I sensed these sparkles were diamonds.

Then, in contrast, I saw a different house. That house was an actual house. It had a roof, thick walls, but its walls were also made of diamonds. I sensed my house was the nest; the other house was another kind of believer’s house. This other kind was one where there was a roof, where both parents were actively bringing their children up in faith, providing safe cover together (illustrated by the roof and walls). I actually sensed God was saying that my home will look like that eventually but, for now, it's the nest version.

Each house had its own strengths; neither was better than the other. They were both beautiful. In fact, both were adorned with Heavenly jewels (the diamonds). However, they looked totally different to each other, so to compare them would be like comparing apples and oranges.

Back to the nest -- The SUM home. This kind of home can seem roof-less, lacking protection. It might appear far too exposed to the elements. For example, media might come into our home that we hope wouldn’t, or other influences. The diamond-walled house in the other scenario with its thick roof and walls appears safer to the eye. But the truth is, our own homes have safety too: It takes the form of an open heaven above us; and a God who takes care of His wee birds (Matthew 6:26).

An open heaven was what the prophet Isaiah cried out for in desperation:

“Oh, that you would rend the heavens and come down, that the mountains would tremble before you!” Isaiah 64:1 (NIV)

Friends, I love that image of God rending the heavens open above us and bringing His presence. Like Isaiah, we can say to God, "Oh please, rend the heavens, come down into my home, and let all the mountains I’m facing tremble before you!" 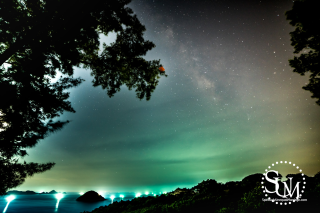 In our open nest, while we gaze at the stars, our beautiful babies (children, teenagers, adult children) sit under that open heaven with a protective parent -- God -- hovering above them.
The fact we’ve built our house with such care on the rock of Jesus Christ looks something like the carefully crafted nest they now sit in. It means they have a great foundation as well as an exciting Heavenly life directly above. The Spirit of God hovers and broods, like a protective bird of prey.

Finally, in this nest picture it's worth noticing that the baby birds’ mouths were wide open. This tells me that our children – The children of this SUM Nation – will surely open their mouths and receive God’s food. Perhaps it will be God who feeds them directly, more than us parents.

So with this beautiful picture, I rest. And I hope this post helps you along in that sense of rest too. As I said earlier, God's got this.

How are those of you who are parents finding it, bringing your children up in faith? If you'd like prayer for this, post a comment and our community will pray for you.