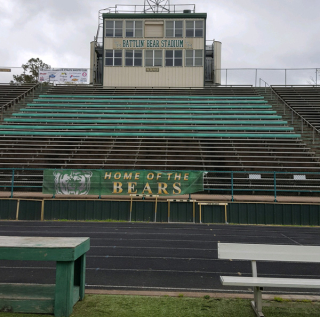 Little Cypress Mauriceville Battling Bear Stadium, Orange, Texas, is exactly what its name implies: The Home of the Battling Bears!

There was a time I spent every Friday night at the stadium watching the boys battle it out with that brown piece of pigskin, with their opponent. Not a football fan, I really went to the games to watch my two daughters perform at halftime with the LCM Honey Bear Drill Team.

After my girls graduated from high school, I became a regular attendee at the LCM Battling Bear Stadium. You see, it was here that I, too, did battle with my opponent, Old Slewfoot himself, as he began to send an assignment of grief to destroy my marriage, finances, and health, as one crisis after another made its entrance into our lives. I walked, ran, and skipped around the track praying, taking refuge from the storm that brewed from our opponent, Slewfoot.

In the past couple of years, due to changes in circumstances, my time at Bear Stadium has subsided. However, I was drawn back to the stadium March 4th to reminisce about those battling times. Though this stadium represented a place of real battling, I had some laughs with Jesus about some of my experiences, as I walked slowly around the tracks that day.

Come! Take a stroll with me around Bear stadium.

Passing by the vistors' bleachers, I spotted the bleacher where I lay flat on my back one afternoon about 5 PM with my arms stretched toward heaven crying loudly, “Oh, God, Oh God, help me, help me!” I grinned as I remembered the kids practicing pole vaulting nearby pointing toward me, laughing.

I giggled as I recalled running the track like "Warrior David," slinging his stone toward Goliath. I'd raise my index finger and verbally sling a chain of "for it is written" scriptures at my Goliaths. I was a sight to see for the other early morning walkers scattered around the track, but I didn’t care---there was a battle to fight for my family—I was determined Slewfoot would not destroy us.

I laughed out loud as I looked behind the bleachers. One morning, I ran to the bathroom underneath the bleachers, only to discover the doors were locked. With the adrenaline still flowing from my warfare on the tracks, I almost let loose, “I bind you, locked doors. In the name of Jesus, turn loose this door and let me in-I have an emergency!”   Some things you just don’t ask amiss; just tell yourself not to drink coffee before a morning of walk and pray.

I shivered when I thought of the morning I arrived at the track at 4:30 AM.  My fellow walkers were not there yet. A nudge from the Holy Spirit told me it wasn’t a good idea to be out there alone. I was about to ignore the Holy Spirit’s word of caution when three men emerged from under the bleachers, making their way out to the parking lot where I sat. Their dress attire told me they were not there to walk the track. I quickly cranked up my car and sped away. No laughing matter.

I glanced at the picnic table in nearby Bear Park. One afternoon, I escaped to my safe haven at the stadium. The picnic table, nestled among the trees, looked inviting, and thus I began my battle cry. A woman crept up behind me and asked, “Are you okay?” I looked at her with tears flowing down my cheeks, snotty nose, and stammered, "Uh-uh; just doing a little praying."  I don't think I convinced her I was okay.

I remembered other experiences I had at Battling Bears' Stadium, as I strolled around the tracks March 4th, but today was different.  I wasn't  binding strongholds, throwing stones at Goliath, or whooping it up. I was not even asking God for a Word, because He had already spoken His promises to me years ago.

How well I recalled those promises when I stood still on the 50-yard-line and glanced up to the top row of the bleachers. Many mornings I didn’t run the track. Instead, I’d march up those steps and take a seat on the top bleacher. Sitting in the presence of the Lord, I listened as He spoke His promises to me and recorded them in my notebook.

Would you believe that as I stood there on the 50-yard-line March 4th, Jesus showed up again? He began talking to me just like my daddy did when I was a little girl.

“Little girl, pay attention; I’m a-fixing to tell you something important. It’s your season for those promises I made to you here at Battling Bear Stadium to be birthed. I am ready to perform My Word.” (Jeremiah 1:12 NKJV)

“And BTW, little girl; I have a new work for you to do for Me. Get ready!”

Wait! Did I just feel a hug and a little fist punch on my shoulder like Daddy used to do? I got goose bumps all over my body.

As if on clue, a soft, gentle rain began to fall, but I continued walking, with my hair getting soaked, my glasses clouding up, and my hands stretched toward heaven in praise. I’m sure the men mowing the grass saw me. Oh, well---

There’s nothing like an intimate walk in the rain with Jesus.

Go Bears! Thanks for the Memories! 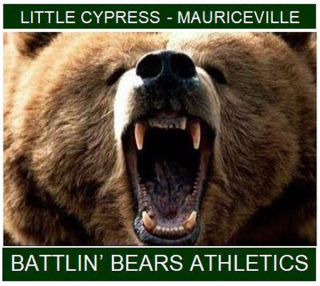 In the comments, I would love to hear your experiences of battling, as well as your intimate talks with Jesus.