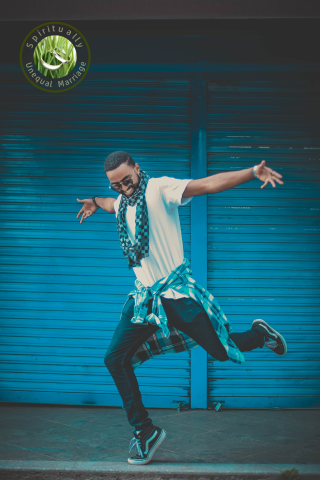 If there's one passage in the Bible that brings a SUM moment to life, it's the one where David dances to the Lord, his wife Michal sees him through a window, and she 'despises him in her heart'. Gulp -- Let's take a look:

“Then David danced before the Lord with all his might; and David was wearing a linen ephod. So David and all the house of Israel brought up the ark of the Lord with shouting and with the sound of the trumpet. Now as the ark of the Lord came into the City of David, Michal, Saul’s daughter, looked through a window and saw King David leaping and whirling before the Lord; and she despised him in her heart."

David then returns 'to bless his household', and Michal is not feeling it:

“How glorious was the king of Israel today, uncovering himself today in the eyes of the maids of his servants, as one of the base fellows shamelessly uncovers himself!” (v.20)

We don’t know what marriages were like in those days, but David must have felt sorely misunderstood. Nevertheless, his response shows determination:

“It was before the Lord, who chose me instead of your father and all his house, to appoint me ruler over the people of the Lord, over Israel. Therefore, I will play music before the Lord. And I will be even more undignified than this, and will be humble in my own sight. But as for the maidservants of whom you have spoken, by them I will be held in honor.” (v. 21-22).

To leap and dance for God like David is akin to the intimacy with God that we're currently talking about in our community. I think we all have a leap to take when it comes to intimacy, and for my own part I can say I found it ever so risky to leap towards God and trust he would catch me. Specifically, I struggled to trust that I would not lose Bryce's favor. That was a biggie.

I was helped in this area by a friend whose Dad was a pastor. I wrote to this friend one day when it was all feeling too hard. My words went something along the lines of, "I think Bryce will go off me if I keep going." My friend duly consulted the Dad, who was old and wise, then flicked me an email:

“Ann, with God, the only way to go is forward. Now that you know that God is real, what else are you going to do? Sit in a dark room with a blindfold on? The fence is too sharp to sit on. But here’s what my Dad says: The closer you get to God, the more Bryce will see the spiritual bloom on your cheek. So keep going!”

This was great advice in theory, but I struggled to believe that Bryce would see this elusive 'spiritual bloom on my cheek'. My friend was saying, “Take the leap, Ann. God will catch you!” but the lie I was believing was “If I move any closer to God I'll lose out.”

To cut a long story short, eventually I let go of the lie. Having leapt into God's arms I truly believe now that the more you love Jesus … Well, everything blooms. As David said to Michal, God has shown himself faithful.

David's response is a good one for us. Essentially he says to Michal, “Look, there is good reason I dance for him the way I do. I am going to carry on, and I will be playing my Christian music.”

Friends, did you catch that? Michal doesn't like his Christian music! I'm laughing as I type and I can't help but wonder if God slipped that part in for humor for us. Even in David’s day, Christian music was hard to play in front of the less believing spouse. Well, nothing there has changed. Eventually, like David, perhaps we stop caring and just play it. In fact, that's been a shift for me only in the last few weeks: I slip the Christian music on, Bryce laughs but doesn't really mind, I keep it on, and as I listen to it I leap -- In my heart.

Well on that happy note, I think the story got a bit more cheerful than at first it seemed. So keep on with that Christian music, friends. And perhaps we can chat in the comments: Has intimacy with God involved a leap for you?