There is Power in My Voice (Oh, Yeah!) 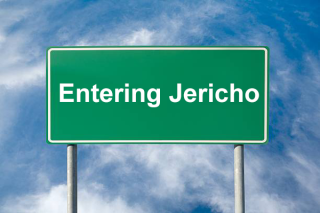 After years of testing in The Wilderness, there came a time when I knew that I had crossed over The Jordan River and was about to enter The Promised Land. I made a pit stop and did three things the Israelites were instructed to do before entering Jericho. (Joshua 4)

I then entered the city of Jericho. Time passed, and I wasn’t possessing the land God had said was mine-no promises nor prophetic words were being fulfilled. Nothing, nothing, nothing was happening. I was there, but not possessing.

One day, I heard a sermon which said that the Israelites still had to fight for their inheritance in The Promised Land because there were still inhabitants on the land, and they were not going to give up easy. In other words, my Promised Land was not going to be handed over to me on a silver platter.

I think this is where I was missing it when I arrived in Jericho. Yes, I knew that God does have an appointed time for the manifestation of His promises to be fulfilled, but I was sitting on my can can just waiting for God to drop the promises in my lap and not doing anything as my part of the covenant.

But, I questioned myself as to “how” to do that, as well as my ability to do so.

And then it happened--Marching Around Jericho arrived in my mailbox. As I scanned through it, my eyes fell on a paragraph that stopped me dead in my tracks. Lynn said,  “Satan is determined to silence humanity. Do you know why? Our voice is powerful. He knows when a child of God discovers who they are and whose they are, then connects their identity with their voice, his defeat is certain.”

Lightning flashed and Holy Ghost goose bumps ran all over my body. I quickly emailed Lynn.

Please don’t be upset with me, but I looked ahead in your book.

I knew that I was in a new battle plan for the manifestation of my husband’s salvation, and the strategy needed to change in order to give birth, but what that strategy was, I didn’t know.

You see, for over twenty years God took me through a hard testing time to re-establish my identity in Him that had been lost in childhood. In fact, I had a prophecy during the midst of it that said: “I have brought you through a hard testing; I didn’t intend to make it easy for you; it was to give you backbone.” I wanted to say, “Gee thanks, Lord, couldn’t you give me backbone without such a severe testing?”

But, nonetheless, I knew that it was through all of this that my identity in Christ and who I am in Him was being re-established. I had no idea prior to this testing who I was. I was what everybody else wanted me to be—people pleaser was the name of the game I had played.

So, this morning, as I was glancing through a chapter in your book, I caught the strategy plan for what I needed for this season of my journey.

Connect my identity with my voice

to defeat the strongholds of the enemy

Obviously, through years of Bible study, I knew Jesus had given me the authority to use His name to demolish strongholds, but sometimes, you just need a rhema word that speaks life into what you already know in order to activate it. You did that for me with the above sentence.

I had been so caught up in establishing my identity in Christ, learning how to respond to certain circumstances, setting up boundaries for what I would accept and would not accept, which was very necessary in that phrase of the battle. But, recently, I knew that it was time for a new battle plan.

Through this chapter, God spoke to me convincing me, not only what the new battle strategy was, but that my voice is powerful. I believe that people who have had an identity problem, can come out of it and know who they are in Christ, but yet they might still struggle regaining the power of their voice that had been pushed down by others over the years.

Oh, Martha. I’m teary. Your voice was stolen and today the Lord rescued back your voice and has set a crown upon your head. You will pray with power and the strongholds and principalities will bow to the name of Jesus Christ.

And so it was, God moved quickly to show me strongholds in my husband that are keeping his salvation from being manifested, as well as the role I am to play as my part of the covenant with Him.

And now, I look like a maniac driving down the highway and walking in the neighborhood shouting,

Obviously, God hasn’t told me the exact day my husband’s salvation will be manifested, but I do believe I heard Him whisper to me: “Martha, go buy a cow, put him in your backyard and fatten it up for the celebration. My prodigal son is on his way home."

There is Power in My Voice and Power in Your Voice, Too! (Oh, Yeah!)

Thanks, Lynn, for connecting the dots, and for Libby’s encouragement to use my voice.