When God gives us a Promise

One of my favorite stories in the Bible is that of Elizabeth (Luke chapter 1). 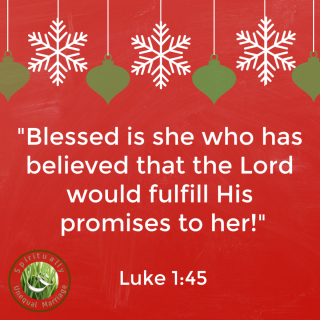 M Her story gets told each Christmas, but this year I'm noticing a curious detail: Her promise had a plot twist. Her baby had a surprise name. And it was this surprise that made her friends and neighbours marvel.

“When it was time for Elizabeth to have her baby, she gave birth to a son. Her neighbors and relatives heard that the Lord had shown her great mercy, and they shared her joy.

On the eighth day they came to circumcise the child, and they were going to name him after his father Zechariah, but his mother spoke up and said, “No! He is to be called John.”

They said to her, “There is no one among your relatives who has that name.”

Then they made signs to his father, to find out what he would like to name the child. He asked for a writing tablet, and to everyone’s astonishment he wrote, “His name is John.” (Luke 1:57-63, NIV).

Elizabeth’s promise was different to what she, or anyone, guessed: The conventional name would have been Zechariah. Instead, the name was John, and he was a wild man who wandered the desert eating locusts and honey.

So far so good.

Now for us, and our promises. I wonder how many of you are believing a promise from God? If so, I imagine it relates to your spouse or, perhaps, children getting to know Jesus? That is certainly the case for me. It might be a promise we've taken from scripture, or it may even be a promise that we've heard the Holy Spirit speak to us.

If you do have a promise you're believing, I wonder if, like me, you have preconceived ideas about what it will look like? For example, my own imagination takes me on adventures. I've imagined my husband suddenly deciding he’s super interested in God. Or, perhaps he will wake to see an angel at the bottom of his bed (I say that laughing). Or, it'll be some dramatic encounter with the Holy Spirit.

Well, I'm realizing I need to think again. God is the storyteller of our lives, and He is fabulously creative. Whatever I’ve imagined won’t be what it looks like. There’s a precedent to this: The greatly anticipated messiah came, but he did so as a baby, then a carpenter in Nazareth, then an itinerant wanderer. Was that expected?

With that in mind, now I have a story to tell: Recently, I heard God say: “Ann, be prepared for your promise to not look how you expect.”

It was curious to me that something strange happened in my home the very same week: My oldest son, Travis, woke in the middle of the night to feel an earthquake. In the morning, he got up and looked online to see what magnitude it had been. To his surprise he discovered there was no earthquake that night.

This might have been considered chance, but we had a similar experience when I converted. Several years ago just before my own conversion, Bryce woke in the night with the same thing. He was asleep in a hotel when an ‘earthquake’ shook him awake. He turned on the TV expecting to see a news report and there was no earthquake. Shortly after that my conversion happened and it certainly caused a shaking in our home. It knocked me to my knees, shook everything that could be shaken and left only the important things in my own heart: Faith, hope, and love.

So, friends, watch this space -- Something could be upon my home again. Elizabeth’s name means ‘God has promised’ and like her I believe that Life is coming. I'm just quietly prepared for the unexpected.

How about you -- What promise(s) are you carrying right now? I enjoy hearing 'promise' stories, so share away in the comments.