Home Who We Are Salvation Stories Significant Resources Meet The Team The SUM Shop Lynn Donovan Ministries New Here? Video Teaching
The Wonder of Lingering
The Day My Church Friends Came to Dinner

So, around this time of year I always post about my Tablecloth of Thanks. But I’m puzzled over something that is happening right now in the church. So, let’s chat about that instead.

If you are new to SUM, please, PLEASE read about this amazing Thanksgiving tradition that also can be gently shared with an unbelieving spouse and family. It’s truly a family heirloom. My daughter has claim on ours as part of her inheritance. Read it here: Tablecloth of Thanks

First, I’m not a fan of his music, even his new album, Jesus is King. (No offense Kanye, just not my style.) I don’t know much about his life prior to his salvation experience other than he married Kim Kardashian. Weird that I even know that???? 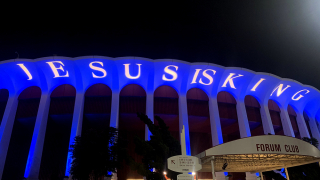 But, I’m absolutely perplexed by the circus that is happening in the church over his recent salvation experience and the meetings he’s been holding. I receive an email daily about it all. Those who are suspect and those who are on the Kanye train. And all social media platforms are ablaze over the Kanye fracas. Sheesh!

Several years ago, what most of America missed ,was that Kanye had a complete breakdown. He was battling demons and voices and it was God who rescued him. I remember reading about this and I knew then what was happening. God was calling him. The demons, there were likely many, were putting up a ferocious fight so much so that Kanye cancelled his engagements for a year and received counseling. I believe that precipitated his entre into the Kingdom.

I keep coming back to this question. And I believe God is asking the same thing. Why do we always tear one another down? It’s no wonder the devil is laughing in his coffee. He doesn’t need to spend efforts destroying our unity, we do it ourselves. From my nearly 40 decades of faith experience, I’m of the position that we need to stop judging the salvation experience of another Christian.

Doesn’t the Word of God tell us we can determine or discern a person saved/unsaved by their fruit?

By their fruit you will recognize them. Do people pick grapes from thornbushes, or figs from thistles? —Matthew 7:16

And even judging the fruit we must lean far, far toward mercy. If any of you lived with me and Mike, you would not know Mike is a believer. He hasn’t changed much since his baptism. He doesn’t attend church. But the small changes in his character and that he now prays, this speaks of his heart. His real faith. There is fruit but he absolutely does not look like what most people expect to see, a Bible thumping, church going, scripture spewing believer.

Personally, I am so very hopeful and praying for Kanye and his family. The pressure they must be under is tremendous. It’s nearly impossible to be a Christian in Hollywood and the family of God hasn’t been much kinder to Kanye.

This man could be one of God’s unexpected heroes. (God LOVES to use people like this. It makes Him look that much more amazing and wise.) Kanye could be a man of God who brings healing between the races and the love of Christ to masses that would never have listened in the first place.

I'll bet you that our unbelievers are watching how all of this plays out. Oh how I hope they see in Kanye how a real relationship with Jesus is so important, so transformative, that even a multimillionaire, superstar is willing to throw it away for the cause of Christ.

Be patient. Did you mess up as a new Christian? How much to you still mess up after years of faith. Let's let Kanye's fruit speak and let's be merciful as our Father is merciful.