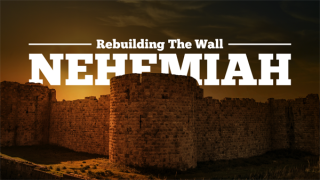 During this Thanksgiving season, I am so grateful for the “rebuilding blueprints” Neheniah passed down to us as he rebuilt the broken down walls of Jerusalem.

Join me today as I outline his plans for rebuilding. Let’s start in Chapter 1 and listen in on a conversation he is having with his Jewish friends.

“How are the Jews getting along who have returned to Jerusalem from their Babylonian Exile?”  “Well, things are not good; the wall of Jerusalem is still torn down, and the gates are burned,” they replied (Nehemiah 1:2-3 TLB)

Nehemiah knew that the Temple in Jerusalem was being reconstructed. Now, his friends were telling him that the city had no protection from its enemies while they were rebuilding the Temple.

Weeping and fasting for several days, Nehemiah asked God to use him to save the city. God answered his prayer by softening the heart of the king who gave him permission to rebuild the walls around the city. In spite of opposition, the wall was rebuilt in 52 days.

I was drawn to this story years ago when everything in my marriage was crumbling. Even though we were spiritually unequally yoked, we had a loving marriage. But, when I followed a new direction the Lord had given me, it was as though an army invaded our home stealing, not only our relationship, but our earthly goods as well. The comfortable lifestyle we had grown accustomed to was gone. Added to this scenario, serious health problems arose. With all the devastation around us, we both wanted to vacate the premises, as in SEPARATE.

Nehemiah’s example of rebuilding was a trumpet call to me to “rise up and rebuild” the broken down walls.

1. Nehemiah confessed the sins of his country, himself, and his ancestors.

I’m praying day and night in intercession for your servants, confessing the sins of the people of Israel. And I’m including myself and my ancestors among those who have sinned against you. (Neh. 1:6 MSG)

Like Nehemiah, I first confessed my sins for the part I had played in our situation. Next, I confessed generational sins on both sides of our families.

I asked the Lord to show me where the walls of protection in our marriage had broken.

3. Nehemiah Had a Vision.

“Face it: we’re in a bad way here. Jerusalem is a wreck; its gates are burned up. Come—let’s build the wall of Jerusalem and not live with this disgrace any longer.” (Neh. 2: 17 MSG)

Andy Stanley, author of Visionary said, “Visions are born in the soul of a man or woman who is consumed with the tension between ‘what is’ and ‘what could be.’ Vision often begins with the inability to accept things the way they are. Over time that dissatisfaction matures into a clear picture of what could be.”

Something inside me clicked. “Rise up and rebuild!”

“What are these miserable Jews doing? Do they think they can get everything back to normal overnight? Make building stones out of make-believe?” What do they think they’re building? Why, if a fox climbed that wall, it would fall to pieces under his weight.” (Nehemiah 4:1-3 MSG)

Unfortunately, for a long time, my husband did not share the same vision for rebuilding as I did. “Do you really think God can fix this mess? You need to get your head out of the sand, and face reality! It is over!”

“Hear us, O Lord God, for we are being mocked. May their scoffing fall back upon their own heads, and may they themselves become captives in a foreign land! Do not ignore their sin. Do not blot it out, for they have despised you in despising us who are building your wall.” (Nehemiah 4:4-5 TLB)

Nehemiah said nothing to his opposition,  prayed, and kept on building. Jerusalem was a city worth fighting for.

I finally realized it was useless to fight back with words at the opposition. By the grace of God, my husband finally joined me, and we have restored most, (not all yet) of those broken down walls that almost destroyed our marriage. Granted it took more than 52 days to get to the place we are today - we are a stiff-necked couple. The fullness of the vision is for an appointed time.

My Sumite Friends, in the comments tell us how Nehemiah’s example for rebuilding the broken down walls applies to your marriage, finances, health,  church.  Together, we can "rise up and rebuild."