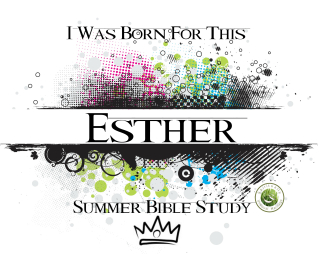 We're now in chapters 4 and 5 of Esther.

As I begin this post, I have this in my head: Know your enemy.

I don’t talk about the enemy much. I deliberately don’t give him airtime. But I do take careful notice of his activities so that I can move appropriately in prayer.

One of my earliest questions as a Christian was whether there really was an enemy of our souls; a being, or beings who were influential in this world. Without going into detail, God did answer that question for me and showed me there is. On a couple of occasions, I’ve even heard a demon, though I’ve never seen one visually. Though I was surprised to hear the thing, it didn’t scare me one bit. It used a lot of F-words, and then spat out what its intentions were. My reaction was “You’re busted! I know what you’re up to.” I guess God allowed me to hear it so that I could pray.

Later, I told a pastor that I’d had this experience. I hadn’t told anyone as it seemed crazy. The pastor nodded, “Yes, they do use F-words, so that would’ve been a demon.” Okayyy… A wild experience.

Why this story? Because chapters 4 and 5 proclaim how we thwart the enemy, and we do it by uncovering hidden things. Esther’s moves are, in essence, spiritual warfare.

The first noticeable move of Esther’s is that she sought out, from Mordecai, Haman’s secret plot. Similarly, for us, beating the enemy involves asking the Holy Spirit to reveal things. If we ask, He will show. Like intelligence agents we can then roll up our sleeves and say, “I’m game! Show me more, Lord!”

Next, came a time of reflection for Esther, helped by fasting. Hearing Mordecai’s wisdom she recognized her own responsibility and the safest way forward. The safest way forward, in fact, involved her saying “If I perish, I perish”. So be it. Lord, so be it. That’s the point we get to, as Christians: “I'm dying to myself now. Let’s go.”

From that strength, she moves. The King extends his sceptre. She touches its top. And in that very move, where she extends her hand and makes physical contact, her favor is established. She will take the territory. I think something similar happens spiritually for us the moment we move forward with faith of a mustard seed. We’ll take the land.

Yet, there is still the process of the feasts. Esther fasts, then feasts. But her feast is not about her eating fun food. Instead, it’s a feast that draws on every ounce of courage. She invites her husband to her table, and it’s a table God has laid for her in the presence of her enemies (Psalm 23:5). Her husband says to her, “What do you want, my darling? You can have half my Kingdom.”

In between feasts #1 and #2, a critical process happens. The enemy's head expands to the size of a balloon as he soaks in his power among his minions. His wife Zaresh is egging him on; her name means ‘misery’ and ‘strange’. “Build a gallows!” miserable Zaresh cries. “YES!” he roars back. The point is, the wait between feast #1 and feast #2 allows him to expand to the point of defeat.

If we are waiting for victory, is there a place for process while the enemy builds his own downfall?

I'm currently reading a spiritual memoir* by someone whose own life conveys this very thing. The author’s life was racked with drugs, sex, and dysfunction for the entire time she raised her children to adulthood. What a waste, one might say. Her Christian parents watching, could only grieve. BUT, in her fifties a divine reversal came. She is now a deeply impactful minister of the Gospel of Jesus Christ. All to His glory.

Friends, hope you enjoyed that.  Do you have any thoughts or comments on these aspects of spiritual warfare?

*Haynes, A. (2018). Too many voices: My journey from confusion to clarity. San Diego, CA: Eternal Voice Publishing.