We’ve recently been discussing the power of words here and on the Facebook group, and these conversations have brought back something that happened to me three years ago. I thought I would share the story. It was a time when God showed me two alternative scenarios in terms of how I use words: One scenario was awesome, the other sobering. With words being a theme, I'll have a go at telling it.

I’ll start with the awesome, which is the best bit. It was a bright February day, and God showed me something that gave me warm fuzzies. He gave me a vision of rainbows coming out of a person’s mouth, accompanied by these words:

The prayers of a faithful person are like fountains of rainbows pouring over the one(s) for whom they pray.

Wow. Rainbows represent God’s goodness, I loved hearing that. What’s even better is that sometime later I came across an article by an author who had had the same picture: Rainbows coming out of mouths, hitting situations with power.

That Easter I also found the attached drawing, done by my little boy. There's a rainbow across our family and what looks like a fighter to the left with cape and sword. It reminded me of the rainbows and made me think, “This is how I care for my family -- Through prayer.”

However, it seemed God wanted to show me an alternative perspective, one more sobering. This ‘alternative view’ came on another bright morning but it was a less cheery vision. In this vision I saw some Christians who were doing wonderful work, and, consequently, a man in their life was giving them atheist banter. The Christians began to talk about this man. With good hearts, they weren’t talking that badly but, nonetheless, labels were used. As they spoke, a see-through dome formed around him, a barrier from which he could not escape but could see out of. Outside the barrier was a chocolate Easter egg in foil wrapping. 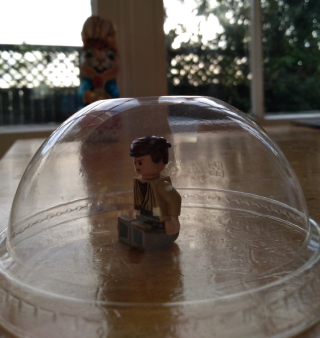 In the spirit of childlike faith, I’ve constructed a visual of this scenario in the attached picture. I couldn’t find an Easter egg so an evil foil-wrapped Easter Bunny will do. We’re God’s kids, and we’re learning, so a childlike depiction seemed fitting. The Easter bunny will be explained in a minute.

What this vision told me is that words construct barriers and walls. In this vision, unintentional words were keeping the ‘atheist’ contained to the point that all he could see of the Easter message was chocolate and emptiness.

James 3 tell us that the tongue, though seemingly harmless, is an unruly evil, full of deadly poison. Yikes, that’s strong. Stronger still, though, is the fact God spoke the universe into existence. Made in God’s image but living in a world where light and dark collide, how powerful, exactly, are our words? Scripture shows examples of God encouraging his children to speak impact. Moses, for example, was told to speak to the rock so that water would come out; Ezekiel was told to speak life into dry bones. But, on the flip side, what power Jesus had to limit the fig tree with one apparently harmless sentence:

And seeing a fig tree by the road, He came to it and found nothing on it but leaves, and said to it, “Let no fruit grow on you ever again.” Immediately, the fig tree withered away. Matthew 21:19 (NKJV)

As believers, are we saying about any fig tree, “Let no fruit grow on you ever again?” Who in our life do we refer to regularly, for example, as ‘atheist’? Are we even tearing down places, families, and churches with our words? I’ve been sitting with the thought asking myself what degree of ROAR, as a daughter of God, my tongue holds and whether I'm being wise enough.

Finally, what I like about these two visions is that the arch of the rainbow contrasts with the arch of the dome. It’s as if they are two contrasting choices a Christian has when speaking about another person. For us, as friends, I guess it's one more story for our war-chest.

It'd be interesting to chat about what situations this might apply, keen to hear your thoughts?