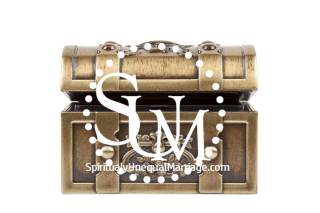 While praying this morning and pondering on the prayer requests in the Ladies SUM group, I sensed the Lord say, “Something needs to die.” That's not what I was expecting Him to say, after all, that doesn't sound very fun or spiritual, does it? He had my attention and my ears perked up. Let's dig a little deeper into what He is saying.

In my minds eye, the Lord brought me back to the year 2000, when the church I was attending in the small town of Fairfield, IL hosted a funeral service. This was not your normal funeral service. It was not a funeral in the natural, it was a spiritual funeral. The congregation was charged with seeking Holy Spirit to find that one (or more) issues in our life that needed to be put to death.

Almost immediately I knew my one thing, anger. On the outside I was a happy person but say something I didn't like and you'd see a whole different side of me. I grew up in an atmosphere of anger, therefore, it became a part of who I was.

On the day of the funeral, we each wrote out a death certificate with our thing (things) on the certificate, including the date. We then signed our certificate telling Father we wanted that thing to die. We presented our death certificate to Father at the altar symbolizing its death. Praise God I've never had to deal with anger again, not! Of course, anger has tried to raise its ugly head again. I then must remind myself and the enemy that anger died and was buried, and I am not allowing it to be resurrected!

It's a choice I need to make, time after time, I must choose to not allow it to attach itself to me again.

Let's look at some of the things we may need to have a funeral service for:

Once you have that one thing that you are ready to let go of; write out a death certificate for it, don’t forget to sign and date it. This is very important as you will need to remember the date and place this service took place when it comes back up. This way you will be able to remind yourself and the enemy where and when it took place. You will then want to put something in a small box representing your thing (it can be a piece of paper with the word/words on it, a token, etc.), ask the Father in prayer and physically reach your hands up and hand him the box (casket). Be sure to bury, burn or throw the box away. You do not want to hang onto the box! No temptation to open it up and let it be resurrected. Then put the death certificate in a safe place as reminder to you, it is finished!

2 Corinthians 5:17 NAS: “Therefore, if anyone is in Christ, he is a new creature; the old things passed away; behold, new things have come.” (Italics by me).

If you feel comfortable, please add the thing that died and was buried. I’d love to be able to rejoice with you and lift you up in prayer!