Home Who We Are Salvation Stories Significant Resources Meet The Team The SUM Shop Lynn Donovan Ministries New Here? Video Teaching
Marriage Prayers of Influence
Hold on Because Your LIFE Depends On It

Our Story is His Story: History in the Making 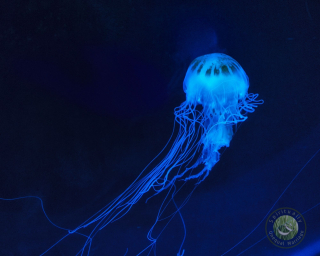 What does the SUM ministry and the blue-bottle jellyfish have in common?

What a strange question, but it’s one that God gave me back in 2016 while our community was fasting. For those who are new here, we fast each year together and it’s not unheard of to hear a word or two for us all during those times.

Indeed, there I was during that fast, hungry and horizontal, when suddenly a picture of a blue-bottle jellyfish swooshed across my mind -- Flash. It was gone as quickly as it came but I promptly knew it was about the SUMites.

When something like that happens it’s an invitation to explore, so I went to Google, typed ‘blue bottle jellyfish’ and began to read. The lines progressed and, as they did, I began to link this extraordinary creature with our beloved ministry here. Some three years later I’d like to share it, it makes me smile.

First, the jellyfish itself:

Electric blue, it might look like one organism but is, in fact, a colony. It comprises numerous individuals called zooids that hang together. They need each other, and so they journey as one. In this state they have absolute power in their territory. Their tentacles are long, deep, and especially venomous. With one brush the prey is paralyzed. Predators stay away from this ‘terror of the seas’.

Interesting, but how does it link to the SUMites?

Well, journeying together like this jellyfish, we’re venomous and terrifying to the enemy. Through our situations, spiritual weaponry is a necessity and we become prayer warriors of the strongest kind. It’s what we learn. The way the jellyfish moves, though, is entirely restful. It’s through the momentum of tides and winds with propulsion coming from outside. In the same way, we here move forward through God’s strength alone.

SUM family, I love the analogy of us interconnected as this strong unit, and I might share now a little of my personal experience as an observer and beneficiary of this ministry:

I first came here in 2014, "a half-baked Christian", "crumpled", who "can’t do any of the things that Christians do." I posted these comments and received encouragement back. "You can do it, Ann, keep going!" Well, five years on I’m relieved to report I’m fully uncrumpled and there's nothing half-baked going on here. To be serious, though, the change in my mindset is marked. I’m charging on in faith.

That’s me. But what I like even more is this ministry’s wider story. It speaks to me of God’s intentionality, and it’s a story I believe many of us will be telling: It's a testimony of a whole community and what happened next.

Back in 2006, we saw one woman (Lynn), then two (Lynn and Dineen), and more, choose obedience, with tangible outcomes. Obedience shone through every one of their posts. Like Abraham taking Isaac to Mt Moriah in Genesis 22:2-8, they modeled the deepest sacrifice: “Put your spouse on the altar, risk that they won’t like you anymore, and choose to say yes to Me”. The rest of us have been doing the same. Amidst frequent anguished wails, we've been growing the fruit of the Spirit. What happens when multiple people obey God to this degree and for this long? What does obedience do? It makes the demons stumble.

Alongside Lynn and Dineen, there is a 13-year story of a community of believers becoming fearsome. It’s a colony that God has built, and a place where the fruit of the Spirit has ripened. From where I sit, there is a visible change in many I have come to know here. It's a story that shouts, ‘COME OVER HERE, TURN IN AND SEE!’ It’s not the salvation of spouses that grabs me the most, though of course we’ve had that! The most noticeable thing, for me, is what’s happened to the SUMites themselves.

We’ve gone from "How are we going to live practically and well in this situation" to "Let’s bring walls CRASHING down!" and, most importantly, "Let’s love God with all of our heart, our soul and our mind". A new book is upon us, and a new season. I'm excited.

Strong and deep as that electric-blue jellyfish, we have a lot to say next and a mutual story to tell. SUMites, I’d be keen to hear your comments. And for now, may we be the most fearsome terror of the seas together!