Home Who We Are Salvation Stories Significant Resources Meet The Team The SUM Shop Lynn Donovan Ministries New Here? Video Teaching
Advent - A Season of Waiting ...
Because of the Manger. This One is BIG

Because of The Manger... Our Voice Is Restored! 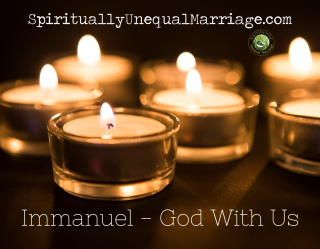 While reading the Christmas story in the book of Luke on Monday, I pondered Zechariah’s story. The Holy Spirit began to speak to me about Zechariah’s angelic encounter, his response, and the significance and similarity in many believers lives today.

Let’s read it together and then I will share the revelation that could very well change the course of your life this very day.

Let us recall that Zechariah was the High Priest serving in the Temple, in the Holies of holy. He and his wife Elizabeth were devoted to the Lord, however, they lived in shame as they were childless. Childlessness was considered a curse in ancient Biblical times.

In Luke, chapter one, Zechariah received great honor when chosen to burn incense in the Temple. While ministering to God behind the curtain the angel, Gabriel, appeared before him and said, “Do not be afraid, Zechariah; your prayer has been heard. Your wife, Elizabeth will bear you a son and you are to call him John….”

Gabriel continues to declare the destiny of John who becomes The Baptist. Let’s pick up in verse 18 and listen to Zachariah’s response:

18 Zechariah asked the angel, “How can I be sure of this? I am an old man and my wife is well along in years.”

19 The angel said to him, “I am Gabriel. I stand in the presence of God, and I have been sent to speak to you and to tell you this good news. 20 And now you will be silent and not able to speak until the day this happens, because you did not believe my words, which will come true at their appointed time.”

21 Meanwhile, the people were waiting for Zechariah and wondering why he stayed so long in the temple. 22 When he came out, he could not speak to them. They realized he had seen a vision in the temple, for he kept making signs to them but remained unable to speak.

23 When his time of service was completed, he returned home. 24 After this his wife Elizabeth became pregnant and for five months remained in seclusion. 25 “The Lord has done this for me,” she said. “In these days he has shown his favor and taken away my disgrace among the people. — Luke 1:18-25

Now this is where the Lord began to speak to me, “Lynn, I know that you are aware through your many prayer session, that many of my children have experienced this very thing.”

“Huh?” I pondered until the Lord went on to explain. “You see, many of my children’s voices have been stolen from them. They suffered much at the hands of those in authority over them who silenced their cries for kindness, consideration, and cries for help. CRIES TO BE HEARD!”

“What happened to Zachariah continues to play out in millions of lives today."

"And Lynn, it wasn’t by My Hand that Zachariah lost his voice. No. His voice was stolen by the demonic the instant Zach decided to doubt and believe a lie. He believed this miracle birth was impossible. He chose by his free will to partner with doubt and deceit, two principalities of darkness. Thus, giving the enemy an entry point to come in, snatch his voice, which was ordained to be a powerful witness of the Kingdom. He believed a lie even though my powerful angel stood before him speaking truth.”

“Stealing a believer’s voice is the goal of every demon. Your voice carries so much power to change everything in the world. But the devil tricks, swirls doubt, pain, and trauma to snuff out the realities that I offer. My children partner with deception even though they have My Word, the Holy Spirit and the testimonies of millions of believers who declare the reality of My power and love."

"Lynn, I’m so glad that you pray with My children and restore their voice.”

“Lynn, but did you see what happened when Zachariah acted in faith and partnered with Me, with My son, Jesus, and with truth? The demonic stronghold was immediately broken, and Zechariah’s voice was restored. Read on!”

59 On the eighth day they came to circumcise the child, and they were going to name him after his father Zechariah, 60 but his mother spoke up and said, “No! He is to be called John.”

61 They said to her, “There is no one among your relatives who has that name.”

62 Then they made signs to his father, to find out what he would like to name the child. 63 He asked for a writing tablet, and to everyone’s astonishment he wrote, “His name is John.” 64 Immediately his mouth was opened and his tongue set free, and he began to speak, praising God. 65 All the neighbors were filled with awe, and throughout the hill country of Judea people were talking about all these things. 66 Everyone who heard this wondered about it, asking, “What then is this child going to be?” For the Lord’s hand was with him. — Luke 1:61-66

“Meditate on this truth. Partner with Me no matter how impossible the circumstances. If I have decreed a thing. IT MUST HAPPEN!”

Who knew the Christmas story could be this powerful.

This is the season of miracles and receiving gifts. Has the devil stolen your voice? Ask the Lord about your voice. Has it been silenced? Do you use your voice to bless and not curse?

Let your conversation be always full of grace, seasoned with salt, so that you may know how to answer everyone. — Colossians 4:6

For out of the abundance of the heart his mouth speaks. —Luke 6:45

Share your thoughts with me in the comments. Let me pray for you in the comments today. I love you Merry Christmas. AND, I can’t wait to discover more on our journey toward Bethlehem!