"Sit Still, Rahab; We Are Coming to Rescue You!" 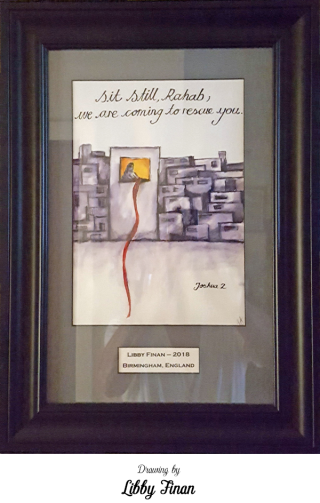 A former pastor of mine, the late David Berkheimer, made the following statement in his sermon: “I believe with all my heart the greatest trials of life are the obedient things God calls us to do.” He pointed out that the trials we face are often in the path God is leading us. A prime illustration of this is in the life of Abraham, the father of our faith.

Abraham was seventy-five when he left the comforts of his homeland to obey God and, indeed, walked straight into trials and difficulty. The trials were the kind of things that would, perhaps, challenge his thinking. “Did I really hear Your voice leading me this way, Lord?" (Genesis 12-16)

I agree with Pastor Berkheimer’s statement that the greatest trials of life are often the obedient things God calls us to do because it happened to me, as I walked down the path God was leading me in 1990. Details of the difficulties I faced are not important, so I will just say that persecution, being misunderstood, rejection, and financial losses became the norm. Believe me, my thinking was challenged! “Did I really hear Your voice leading me this way, Lord?”

One day as I was bemoaning my situation to the Lord, the story of Rahab, the harlot, became so real to me. It wasn’t the familiar facts associated with Rahab that captured my attention, such as her hiding the spies Joshua had sent into Jericho to spy out the land, or the lie she told the king’s men who came to her house looking for the spies.

It was the conversation she had with the spies about her personal rescue when the Israelites would invade Jericho.

She reminded them she had shown them kindness by hiding them, and then asked,  “Are you going to save me and my family when the walls of Jericho begin to fall since3 I showed you kindness?”

The spies promised her they would, but they added a stipulation concerning her rescue. If they go out into the street and are killed, it will not be our fault. But if anyone lays a hand on people inside this house, we will accept the responsibility for their death. (Joshua 2:19 NLT)

In other words: ““Sit Still, Rahab; We Are Coming to Rescue You!”

And so it was. The walls of Jericho came tumbling down while Rahab sat in the window with the scarlet thread flowing to indicate which building she was in, waiting for her rescue. Fear could have caused her to run, but she believed the men of God would do as they had promised.

Now, that is faith and trust in action.

My mental picture of Rahab sitting in that window, with the red thread flowing, penetrated my very soul. It became my focus to sit still and wait for God to rescue me from the difficulties I was experiencing as I walked down the path He had lead me.

One day, it suddenly hit me! God had been rescuing me throughout the journey.

He rescued me from:

In 2011, another rescue took place when I met Lynn Donovan and Dineen Miller on the pages of Winning Him Without Words.

In short: God rescued me from myself.

As an added blessing God gave me, I met a young woman by the name of Libby Finan from Birmingham, England; yes, Libby, one of our own Sumite Sisters.

I was drawn to Libby’s inward beauty, as well as her artistic ability. One day as we chatted, Libby asked me, “Martha, what is your favorite Bible verse?”

So, I told her about the image I had of Rahab sitting still, waving the red thread out the window, waiting for Joshua to rescue her. I briefly told her of my own personal rescue by the hand of the Lord.

She immediately said, “I am going to draw that for you.” And so it was--soon the picture on this blog arrived in the mail. I rushed to Hobby Lobby to have it framed. It now hangs in the foyer of my home.

I chuckled to myself. When I was going through the most difficult season of my life, an eleven-year-old girl was growing up across the ocean from me. Little did I know that one day she would draw the picture that was the source of my healing in the 90’s and would now be a part of my continued spiritual and emotional healing.

See you in the comments with your rescue story.