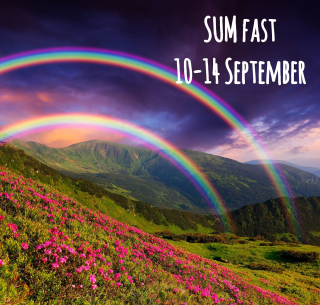 It's day two of the fast, and I hope you’re doing well. If one day you don’t manage what you set out to, don’t worry -- we just pick ourselves up and carry on.

One thing that I believe God adores about the SUMites is our HOPE. Like Abraham, who had a son at age 100, we have been given something unbelievable to hope for: The turning of hearts among those who would be the least likely. Holding on to this hope is pretty difficult, but if we choose it we are partnering in God’s move:

“Against all hope, Abraham in hope believed and so became the father of many nations.” Romans 4:18 (NIV)

One possibility is that it's the actual picture of the victory, which we then choose to believe. It is, perhaps, the ‘different spirit’ held by Joshua and Caleb, who were sent to spy out the promised land. Instead of focusing on the scary giants, they saw the milk and the honey in the new land (Numbers 14:7-12). In their mind’s eye, the milk and honey were “flowing” – meaning, it was vivid, lively, and active to them. It was the vibrant future they would step towards.

It takes a different spirit to choose hope.

"But My servant, Caleb, because he has a different spirit in him and has followed Me fully, I will bring into the land where he went, and his descendants shall inherit it." Numbers 14:24 (NKJV)

Like Caleb and Joshua, we can see the milk and honey when looking at our situation, never mind the giants. However, like anything, we need God’s help to do this. Today I feel He wants to gift us that help. I hear Him say today, “Tell your hearts to dream again!”

Here’s a word I’ve been holding for the SUM community, I pray that it will reignite hope for us all.

A few weeks ago (17th of August), I woke to hear the Holy Spirit say “Look!” And then this:

“LOOK among the nations and watch –

For I will work a work in your days

Which you would not believe if it were told you.”

This is hope. LOOK. Some things look powerless, difficult, but no -- LOOK.

On that morning, this word -- ‘LOOK’ -- was followed by a vision (like a video clip playing in my head): It was of a bunch of miners in white hard hats, cheering. This was very random, but it was as if God was saying, "Go on, look at this picture".

I had no idea what to make of the vision, but later that day it occurred to me to google ‘miners’. This took me straight to a YouTube clip of a group of miners in white hard hats cheering! My mouth dropped open, and I laughed as I saw it – God is fun. But then, in all seriousness, I realized this clip was of the 33 Chilean miners who had been trapped and then rescued in 2011 – which, of course was no laughing matter at the time.

Why on earth did God point me to this?  The answer, I believe, is that He wants us to LOOK and visualize what Rescue will look like; because what is coming to us is a rescue of eye-catching and communal proportions.

"For I will work a work in your days which you would not believe if it were told you." Habakkuk 1:5 (NKJV)

I’m going to let the clip speak for itself to you – well, there were two. Here they are below. See what imagery they bring to you as you think about the rescue that God carries out and promises:

This, to me, is milk and honey. It's a lively picture, it's our vibrant future. It's what I’m going to choose to focus on.

Perhaps we can share in the comments what these clips say to us, what we notice in them, and what we will do with this hope.

Be encouraged, friends – I am! – and I’ll see you tomorrow.