Home Who We Are Salvation Stories Significant Resources Meet The Team The SUM Shop Lynn Donovan Ministries New Here? Video Teaching
Got Questions? We Have Answers!
Going To Hell?

Do You Want The Evidence Or The Truth?

b : something that furnishes proof : testimony; specifically : something legally submitted to a tribunal to ascertain the truth of a matter
(Merriam-Webster online dictionary)

Last post (This Is Just The Pits!) we began to take a look at the life of Joseph. We discovered that there are ten tests we must face in order to fulfill our God-given purpose (I highly suggest you read From Dream to Destiny by Robert Morris for more on this topic). I want us to really dive into the deep end of the pool as we learn more about the pit test.

First, let's continue on in the story of Joseph. At this point he was ambushed by his brothers and thrown into the pit. Changing scenes, we see what happens with his family next:

So [Joseph's brothers] took Joseph's tunic, killed a kid of the goats, and dipped the tunic in blood. Then they sent the tunic of many colors, and they brought it to their father and said, "We  have found this. Do you know whether it is your son's tunic or not?" And he recognized it and said, "It is my son's tunic. A wild beast has devoured him. Without doubt Joseph is torn to pieces" (Genesis 37:31-33). 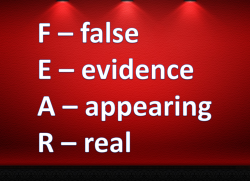 Joseph's brothers did not flat out lie and say that Joseph was killed. Jacob came to that conclusion because of their leading question, "Do you know whether it is your son's tunic or not?" This is what we would call fabricated (false) evidence.   Remember evidence is an indication or something that furnishes proof. This evidence in Jacob's mind was proof that his favorite son was dead - to him it was the truth.

For over 20 years, imagine Jacob as he says in v. 35, "For I shall go down into the grave to my son in mourning." Imagine a father so heartbroken that he was not able to be consoled. I don't know for certain but I can imagine countless nights of crying himself to sleep, restlessness, no appetite, deep depression...unable to move on. Not only that but his other sons could have easily freed him from all of it...over 20 years of seeing and living with their father. What callous and prideful hearts!

What about you? What fabricated evidence has been stacked up against you? Your marriage? Your parenting? Your identity in Christ? What lies of the pit have kept you trapped for far too long?

We live in a sin-hardened world, and we will be tempted by fabricated evidence just as Jacob was. And like Jacob, we will suffer unnecessary grief if we allow the lies of the pit to determine what we believe.

This is very important. If you want to get out of the pit, you must learn to discern the lies of the enemy. Because when you are in the pit, you are especially vulnerable. When you are in the pit, circumstances usually don't look very favorable - and that is exactly when Satan will manipulate those circumstances in order  to deceive you. He will hold up those circumstances before you as evidence that you should believe him rather than have faith in God. But fabricated evidence is not the truth. Joseph's brothers held up a bloody coat as evidence, and that evidence looked pretty convincing. But it was fabricated evidence. It was not the truth. If you want to overcome the lies of the pit, you must learn to focus on what God has said. When you are in the pit, you must remember that nothing is too hard for God, no matter what evidence the enemy might produce...

Yet even worse than his fabricated evidence is Satan's biggest lie: "You've messed up too badly. It's too late for you. You've messed up too badly to ever fulfill God's destiny for your life." Do you realize that the Bible is a book entirely about restoration? The Bible is filled with stories of people who messed up so badly that it seemed even God couldn't do anything about it - and yet He restored every one of them. He wants you to know that nothing is impossible for Him. As long as you have breath, it is never too late to call out to God. It doesn't matter what pit you are in. If you call out to God, He can fix it. And that is the real purpose of the pit. (pp. 38-39, From Dream to Destiny, Robert Morris)

Next time I want to finish up with the hope we have - the light at the end of the tunnel - in times of experiencing the pit test. But for now, let's meet in the comments. Let me speak truth into you and pray with you as we debunk the lies of the pit. Lean into this reality that fabricated evidence, no matter how convincing or real it appears, is NOT the truth. I promise you that this assurance will transform your life and catapult you out of the pit.

You were dead because of your sins and because your sinful nature was not yet cut away. Then God made you alive with Christ, for he forgave all our sins. He canceled the record of charges against us and took it away by nailing it to the cross. In this way, he disarmed the spiritual rulers and authorities. He shamed them publicly by his victory over them on the cross.