Home Who We Are Salvation Stories Significant Resources Meet The Team The SUM Shop Lynn Donovan Ministries New Here? Video Teaching
Life Is Too Short to Live Any Way but Happy! By Lori Lyn Skipper
The Power to Accomplish

What Will It Take To Increase YOUR Faith?

I asked Lynn if I could do an additional post this month because I wanted to share a really cool story with you. I pray it activates and strengthens your faith to use your God given authority like it has me.

In my spare time, I love to upcycle things. Especially using license plates and 100+ year old barn wood from my grandpa's family farm. This year I really  ramped up my exposure going from doing the typical 2 -3 shows a year to 9-10 this year. On Friday afternoon, June 8th, the back power hatch when out in our suburban. It refused to open! I had to open the half window and reach through to try and get my groceries. We have a pickup truck but I can't use it for shows because we don't have a topper and I take a LOT of stuff whenever I go. I was a little worried because I was going to load the stuff up that night so that way I could just leave in the morning. My grandparents always come from Kansas City and help me with the shows. This time it was only my grandma and I.

During dinner, I told him that the hatch is broken and I was worried about it. I wanted to load the car that night so we could just leave in the morning. He said that he would take a look. Turns out the part for the hatch is a self-sustaining piece. There was no backup switch, lever, etc. to use in case of malfunction. He was frustrated as he had to figure something out and he was losing daylight. If I could brag on my husband for a second, Jason is kind of like MacGyver. He can see things and put things together in such a way that I am always mind blown. I know a lot of it is the Holy Spirit guiding and directing him because he truly is gifted in this way...oh the day he realizes this! 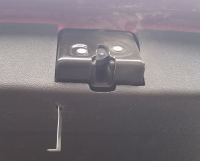 needed it to the next day. He gave a clear warning that NOTHING is to touch or lean against this lever. If it gets accidentally bumped, it could open the hatch, even if we are driving on the road. It was too late to load up the car that night so it would have to wait until morning. That morning, I made a point to hit the floor with my knees and pray. I refused to begin my day without His presence and making myself right before Him - mending our relationship. Praise God I did!

Turning out of my neighborhood onto the first main street (see below for a screenshot of Google Maps), I accelerated a little to quickly to get out the way of the oncoming traffic. This caused the stuff in the back to shift, a bump of the lever, and an opening of the hatch...as I am driving down the street! I quickly pulled to the side of the road, and my grandma and I got out of the car and scrambled to pick up the debris spread across the 4 lanes of the road. A white truck immediately pulled to the side of the road behind us and a man sent by God helped us move things to the side of the road. Another car stopped in the far left lane right behind some grid and a heavy tote and both men brought it to the side of the road. Trying to hold it together I thought, I don't even want to go anymore! Let's go home. I was overwhelmed...BUT God! He quickly swept the fear away and I was able to see with spiritual eyes the hand of God and the dispatch of angels. Grandma and I loaded the car back up as a cop car pulled up behind us down the street...making sure we were safe as we finished up. Getting in the car, I replayed that scary incident back in my mind. How is it that absolutely NOTHING got broken? How is it that there was NO traffic behind me as my car spewed out projectiles across all 4 lanes of traffic? How is it that I saw a car run over my plastic table but there was absolutely no damage to it? How is it that this cop who pulled up shortly after didn't cite me a ticket for my rigged hatch? How except for God? How except for angels on assignment?

Beginning to cry, I held grandma's hand, gently shaking from adrenaline. Yes God did something so miraculous in that moment but now it was time to work. I prayed praised God for all that He had done. I then specifically called upon my angels and dispatched them to protect our vehicle. I said, "don't let that door open. Close the door like what was done for Daniel with the lions mouths. Keep that door closed until it is time. Don't let anything move or shift in the vehicle. Put a hedge of protection around our vehicle and get us there safely. You know what? They did! The rest of the 13.7 miles to our destination everything was smooth sailing. On our way home, same thing. With each second as I carefully drove, my faith increased as I saw with spiritual eyes the power of prayer. 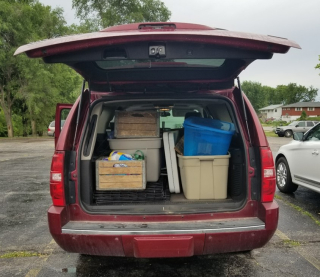 Taken just after we arrived at the craft show at Chandler Acres Church.

Share in the comments a moment that angels were dispatched on assignment for you. This is not to praise the angels but to praise the One who created them - having you in mind when He sent them for your benefit and care.