Home Who We Are Salvation Stories Significant Resources Meet The Team The SUM Shop Lynn Donovan Ministries New Here? Video Teaching
Our Bottom Drawer
What Will It Take To Increase YOUR Faith?

Life Is Too Short to Live Any Way but Happy! By Lori Lyn Skipper

Welcome back to the adventures of Lori Lyn Skipper. My son, Brad, and I made it just fine after his dad left us because we had God on our side. Yes, there were definite struggles, but I had such a peace about me, Philippians 4:7 NLT: Then you will experience God's peace, which exceeds anything we can understand. His peace will guard your hearts and minds as you live in Christ Jesus.

The Lord called me to the ministry in 1998. I preached my first sermon in March 1999.  I eventually moved to Benton, IL by the leading of the Lord where I continued serving in the ministry. I was diagnosed with fibromyalgia, lupus, arthritis, and chronic degenerative disc disease.  In 2005, I almost died from these and other afflictions, such as Barrett’s esophagus and bleeding internally, but God!

I know that by Jesus’ stripes I am healed because the Word of God tells me so in Isaiah 53:5. I have since been healed of many afflictions and diseases. There are some that I am still working on catching my healing, but it is well with my soul. I believe these are in direct relationship to the life I lived before Christ. Yes, I believe He will completely restore me, but I also believe I am suffering the consequences of my actions and need to walk some things out. I actually appreciate the miracles I’ve experienced more because of what I have to walk out. 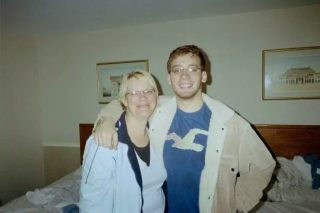 Not only did the Lord restore my soul but He restored my relationship with Brian in March 2009. I had sent letters numerous times to Brian via his grandmother’s address and never heard from him. In mid-2008, I located him via Myspace, prayed and sent him a message. About three weeks later, I received a response from him, he said he reread all of the letters I had sent him, but he was not ready for a relationship with me.

Finally, in Feb of 2009 he said he was ready to meet for the first time since 1993. My family had a surprise birthday party for my mom on March 8, 2009. Brian came to become reacquainted with me and the rest of my family. Since that time, Brian and I have worked on developing a relationship. He now lives in Portland, OR but we stay in touch. The best part of all of this, he came to know Jesus Christ as his Lord and Savior living in Missouri. He is currently not on fire for the Lord, but I believe he will be again one day, as well as my youngest son Brad will be also. In Jesus name!

Brad & Lori - During Brad's service in the Marines

Fast forward to December 2015, I was not looking for a husband, but I met mine. John was not looking for a wife, but he found one. From the day we met, the Lord spoke to me that my husband was going to be an integral part in me fulfilling the dreams and calling the Lord has put on my life. My husband is a pre-believer, but I thank God every day for him. He is very supportive of me. He also encourages me in the new adventures I am on with the Lord. We have our struggles due to his life style, but I have learned when to speak up and when to let it go. I have learned to lay down boundaries and will not accept any disrespect towards me. When it has happened, I have been quick to nip it in the bud. I daily thank my husband for his support, encouragement, for his hard work to provide for our family, for his love for me and my sons, for doing dishes, taking out the garbage, whatever it may be. I thank him and let him know how much I appreciate him. It’s vital to our marriages to show love, honor, and respect.

Life is too short to live any way but happy. I have come to the place where I know who I am in Christ Jesus and I won’t accept anything less than His best for my life. I know in Whom I serve, and I don’t forget for one day Who He is or what He has done for me.

I close with Lamentations 3:58 NKJV: “O Lord, You have pleaded the case for my soul; You have redeemed my life.” Amen!

Lynn Donovan: Thank you Lori for your heart of love for our community and for your courage to share your story. Your life brings great honor to our Father. Well done good and faithful servant.  SUMites, give a shout out to Lori in the comments for sharing her heart with us. Hugs. Lynn