SUMites Summit on the Summit by Libby

When I was paying for the SUM community, Holy Spirit started downloading words and pictures into my soul for us! So, in prayer, I grabbed my pen and sketch pad and let Holy Spirit flow through me. This is the first time I have ever done this, and let me tell you, it was awesome and I want more!!! I really hope that the photo at the end of this post expresses it properly (best viewed on laptop/pc). I pray that God will bless you through it and reveal to you in your heart what He wants you to know :)

Holy Spirit led me to this scripture for the SUMITE ARMY:

"Raise a banner on a bare hilltop, shout to them; beckon to them to enter the gates of the nobles. I have commanded those I prepared for battle; I have summoned my warriors to carry out my wrath — those who rejoice in my triumph. Listen, a noise on the mountains, like that of a great multitude! Listen, an uproar among the kingdoms, like nations massing together! The Lord Almighty is mustering an army for war. They come from faraway lands, from the ends of the heavens — the Lord and the weapons of his wrath — to destroy the whole country." Isaiah 13:2-5

Then, knowing I am a word nerd, He led me to contemplate "Sumite" and how similar it is to "Summit". I got super excited! Look at the dictionary definition of Summit and how it ties in with this scripture!

1 - The highest point of a hill or mountain. (God is calling the Sumites to the Summit of the mountains/hills)

1.1 - The highest attainable level of achievement. (God is the highest of the highest. We are victors through him)

2 - A meeting between leaders (we are being called to converge at the Sumite Summit on the summit!!!)

Holy Spirit then blew me away and as I prayed, it was as though He downloaded these prophetic words to me for all the Sumites:

The Sumite army is rising up! This army has been amassed from across the world, and now it is time to join together and wage war! Listen to the sound of the horn calling you! Move forward inch by inch to take back the land that the enemy has stolen! It is our land - it rightfully belongs to us through Christ - and it is time to march forward and reclaim it. We belong to God, He has called us by name, we are His chosen army. Rise up to take back land and free the captives of the enemy (our unsaved loved ones) who will then join the army and be mighty soldiers for God. Who better to make a powerful and effective fighter than one who has been held as a prisoner of war?!

The battle is the Lord's. He goes before us and fights for us. He sends angelic armies to join forces with us. Trust Him. We fight from a position of victory! He has already overcome the enemy. Wave His banner high over you, blow the shofar, sing praises, dance and worship! The ground will shake and tremble. Mountains will crumble. Chains will be broken. Prison cells will be unlocked. We will spill the enemy's blood. Angelic armies are joining forces with us and fighting for us. Be fierce and forceful in battle, your strength comes from the Lord God Almighty and he has given us every provision we need to win. We are victors, we are overcomers, we are more than conquerors.

Our battle plan and strategy are given through His word. Remember, put on the full armour - this is essential - and keep your shield of faith high and declare hedges of protection around your families and your households. Use your weapon - the sword of the Spirit, His anointed word, which is sharper than a double-edged sword, the most powerful weapon which no enemy can withstand. Follow Jesus' example when He was attacked and tempted by the devil - He declared the Holy Word and did not enter into negotiation. Know your enemy. Know his deceitful tricks and strategy - knowledge is power. What are your weakest points? Where is he likely to press? Is there anything that could compromise your hedge of protection?  Pray for discernment and wisdom and God will answer you and deliver you.

We have the organization needed in our ranks: generals, officers, watchmen, gatekeepers and foot soldiers. If you are battle wounded and weary and can't be on the front line right now that is okay. But, pray for the army and you can regain your strength so that you can join the fight on the front lines. The way to stop becoming battle weary is to rest in His love and peace. Worship Him. Draw close to Him. Speak to each other in hymns and prayers. If anyone falls down, then the rest of the army should surround them and encourage them. When the generals and leaders are fatigued, foot soldiers should carry them. When a comrade is injured, tend to them. This battle is real - the Sumites are already experiencing the attacks of the enemy and some are wounded in battle. BUT, the enemy may be able to superficially wound us, but he cannot beat us or kill us and he knows it. We are each sealed by Holy Spirit and stamped through and through as God's child. Do not be afraid. Do not tremble before the enemy. God did not give you a spirit of fear, but of power and of love and of a sound mind. He has blessed you with every spiritual blessing. He has given us everything we need. Use it and put the enemy back in his place!

The enemy is trembling, he knows his time is nearly up and he will now amass all his forces in every last ditch attempt to defeat us. But, we shall not be defeated! Stand guard. Stand firm. Press on. Know we are victors through Christ. Prepare for victory and celebration. God's glory will be sung throughout the land and our victorious cries will resound in heaven!!! 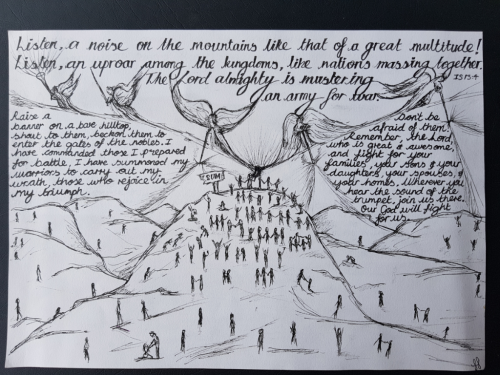