Home Who We Are Salvation Stories Significant Resources Meet The Team The SUM Shop Lynn Donovan Ministries New Here? Video Teaching
Weapons of Our Warfare
The GREAT Power of Our Warfare 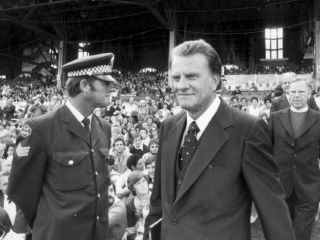 The passing of Billy Graham two weeks ago brought back a flood of memories for many people. No doubt you’ve seen the many tributes for Mr Graham over these past couple of weeks. And I wanted to take a moment to express my own small tribute to him.

The photo at left was taken in 1979 at one of Mr. Graham’s crusade meetings held at Sydney’s largest racecourse. 1979! Oh what a year. I think back on it with great fondness. I was in Year 10 at school and I particularly loved that school year. I even did well at Science that was a first for me. It gave me a boost especially as I wanted to follow in my Dad’s footsteps and study medicine. When it came to selecting my subjects for the final two years of school, I ignored the vocational guidance tests that indicated I was more suited to arts-style courses, and chose to study physics and chemistry so as to give myself a chance of qualifying for medicine. I soon discovered in the early weeks of Year 11 that I really wasn’t cut out for either of them. Darn!

But more significantly in 1979 I met Jesus. Because of Mr. Graham.

I had been attending youth fellowship and church for about nine months when Mr. Graham’s crusade came to town. So many of us from church attended that we had buses ferry us to the other side of Sydney to Randwick Racecourse to attend each night. We had a lot of fun on those bus trips.

I attended five nights. To hear Mr. Graham speak. To hear more about this person, Jesus Christ. I responded to his alter call invitation on the first night. I remember that stirring in the gut, will I/won’t I, and then having to make a long trek from my seat in one of the stands to the front of the stage. I was met by a man, one of hundreds of volunteers, who said a few things and gave me a small book. I never heard from him again. But that didn’t matter. I’d accepted Jesus into my life. I was born again.

Soon after the crusades finished I enrolled in confirmation classes at my church. Yes, we had eight to ten weeks of classes in the home of one of the great families in the church to learn more about what being a Christian meant. In addition, we were given an overview of various disciplines like prayer and reading the Bible.

I also needed to be baptized as my parents didn’t baptize any of us when we were young. This created a bit of angst with my Dad. He challenged me to consider ALL the alternatives to Christianity and even asked me to read a book written by Carl Sagan who was a recognized God-skeptic. I read it but it didn’t discourage me in my decision. Dad appreciated the fact I read the book and even though he still questioned my decision he allowed me to proceed.

It has only taken me another almost 40 years to begin to better understand who Jesus is and how much He loves me but gosh I’ve loved the journey. Certainly, there have been many valleys where I’ve struggled in my walk but I’ve come to realise the importance of communicating with the Lord, reading His Word all the time, and being in community with other believers is so important to moving forward. Most of my valleys have been times of when I’ve tried to do life on my own terms. It’s been in learning that God made us to be dependent on Him that I’ve discovered the victory we have in daily walking with Him.

Thank you, Mr. Graham, for introducing me to Jesus. There have been so many wonderful and much deserved tributes dedicated to the great man but it’s kinda special for me to know that I’m one of the many millions who carry the legacy of the incredible life he lived. I’ll always treasure his memory.

Now your turn SUMites. I'd love it if we all could share a little in the comments of someone who has played a key role in your faith walk.