Busy Monday In The Temple 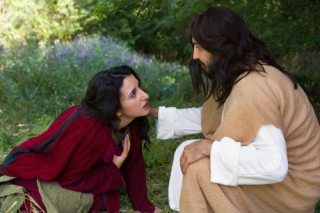 It’s Monday in the Old City. Jerusalem is all a buzz that Jesus, the healer, is at the Temple. Reading through the events of Passion Week Monday, this verse, jumped out at me:

Following Jesus’ rebuke to the religious leaders where He said, “It is written, ‘My House shall be called a house of prayer,’ but you have made it a “den of thieves.’”

Leaves Bethany
Curses the fig tree on the way into the city
Weeps over Jerusalem
Cleanses the temple for the second time in His ministry
Late in day, looks into the Temple, then leaves the city
Spends the night in Bethany

I wonder if we might consider an event that occurred earlier in Matthew.

Just then a woman who had been subject to bleeding for twelve years came up behind him and touched the edge of his cloak. She said to herself, “If I only touch his cloak, I will be healed.”

Jesus turned and saw her. “Take heart, daughter,” he said, “your faith has healed you.” And the woman was healed at that moment.

I wonder sometimes, I just wonder, if we need to be bold enough to put a demand on the healing power that is ours through Jesus? Or perhaps not just bold…. But desperate enough to lean into our faith and pray saying, “If only I may touch His garment, I shall be made well.”

Persistence and faith, when married together ARE the touch to the hem of His garment. Pray with belief. Pray every day expecting. Pray and ask for your healing, breakthrough, and your increased portion of the Kingdom.

I’m not naive to say that healing always happens. But, I won’t stop asking just because I’m unable to explain every why or why not. I choose to believe because I have born witness to the miraculous. And if you are waiting for your turn to bear witness, then pray and ask, placing a demand on your faith and move heaven to seek your healing and breakthrough…. It’s the season for both…

It may be Monday, but Sunday’s commin!