Home Who We Are Salvation Stories Significant Resources Meet The Team The SUM Shop Lynn Donovan Ministries New Here? Video Teaching
The ACTS 2 Church
God Replies To The Cry Of My Heart

Chapter One of Esther: The King Divorces Queen Vashti

Hello, my friends! Welcome to part one of our study of Esther! Like many of you who commented on Monday, I love the book of Esther. The more I read and study it, the more I appreciate the complexity and the multiple layers that compose this fascinating story. 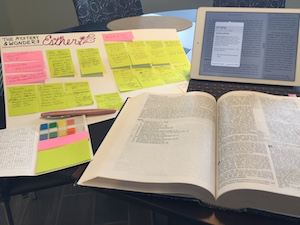 A little glimpse of my work area as I study Esther.

And that is how I've decided to approach this amazing book of the Bible. We will go chapter by chapter in search of the truths and details of each layer.

The Layers of Esther

When I look at stories, I tend to look for layers and how they intertwine together. Esther is rich in this kind of structure and symbolism as well. I hope you get as excited as I do when I discover these details. They truly bring the story to life in my mind, and in my heart, my friends.

These layers appear to be:

First, let's ground our story in a relatable timeline. Esther's story begins to unfold about 15 years before Ezra would lead his expedition to Jerusalem. If you've read the books of Ezra and Nehemiah, you're probably already familiar with the poor state of the temple and surrounding walls in Jerusalem and the astonishing way God moved a pagan king (Cyrus) to help the Israelites begin to rebuild it. So basically, the books of Ezra, Nehemiah and Esther are about the restoration of Israel.

So, imagine if you will, that you are a Jew living in one of the 127 provinces ruled by King Xerxes. Your people have been in exile for some time and have settled all over these provinces. Yet you sense things are about to stir and change. You know the prophecies of the Torah and have a tenuous hold on the the promise that one day Yahweh would restore the nation of Israel and return you and your people to Jerusalem. But perhaps you're struggling to imagine how God could accomplish such a thing after the destruction of the past.

Yet right in the midst of your story, another begins to unfold. We're now peeking into the palace of King Xerxes as he closes 180 days of celebrations to display his vast wealth and the glory of his majesty. The palace is full of nobles, officials and the servants doing their bidding. And now, the king is giving a final banquet in the enclosed garden with unlimited food and drink.

Here's where we find the first hints of God's presence, clues I believe the unknown author of this story included to show that God was always there even though He's not mentioned. We see this in the use of the number seven, which is associated with God and His creation.

What else can we glean and take not of in this first chapter of Esther's story? The celebration of Purim doesn’t exist yet, as it it a tradition direction birthed out of the events of Esther. We will explore that more as it unfolds toward the end of the book and how it continues to be a key part and celebration for Jews today.

Some speculate that the king’s request for Queen Vashti to present herself before the court may have actually meant she was to appear nude, waring only her crown. However, that is not historically or biblically supported. But it does seem she would have been in a somewhat humiliation position to be on display before men who had been drinking without limit for seven days. Yet surely she knew the risk and felt she needed to still refuse the king’s request.

Now let's have a little fun here. How about the names of those nobles and eunuchs? I find those fascinating as well. Names were often used to indicate the person's vocation, character, or relevance in the stories of the Bible. And remember, these were real people, SUMites.

First, let's quickly cover that the role of a eunuch wasn't usually voluntary. The position required the man to be castrated, which seemed to be considered an insurance of loyalty to the king and the protection of the king's property, specifically his wives and concubines.

Here are the seven eunuchs mentioned in chapter one and their meaning:

Bigtha - in the wine press

What's interesting is that Bigtha and Abagtha are listed together in the ESV translation, yet not in others. But that's a question for the scholars out there.

Here are the names and meanings of the seven nobles mentioned in chapter one:

Admatha - a testimony to them

And it is Memucan who speaks in reply to the kings question of what to do about Vashti’s refusal of the king’s request, which they perceive to be a threat not only to the king’s authority but also to the authority of every husband in his home.

My friends, in this first chapter alone have "watched" the positions of two roles change. The place of queen is now vacant due to Vashti's dismissal (divorce) by the king. And a new proclamation in every language has been sent to all the provinces stipulating that the husband is the ruler in his home.

How interesting...how interesting that the voice of the women in this kingdom was silenced at this point of the story. Here we see the enemy's reaction to God's action, as if he is anticipating God's plans to bring a new voice from an unsuspecting place and person to save the remnants of Israel.

And that's where we will leave this fascinating story for today. My friends, what aspects of Esther are coming to life for you? What insights are you gleaning? Let's have some fun in the comments!