Home Who We Are Salvation Stories Significant Resources Meet The Team The SUM Shop Lynn Donovan Ministries New Here? Video Teaching
My Unsaved Spouse and Church This Easter
What Really Happened With The Crown Of Thorns

The Tearing of the Veil 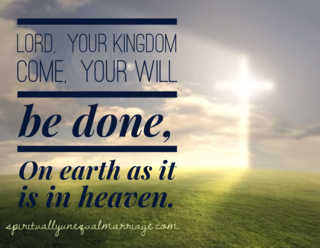 My friends, I’m heading Holy Spirit’s nudge to write about the veil, which hung in the Jewish Tabernacle built by the Israelites and Moses per God's detailed specifications. I've always been fascinated with the veil and how it tore at the moment Jesus died. But let's go back to the first place the veil was established.

It stood as a physical and spiritual separation between the Holy Place and the Most Holy Place, an inner room that held the Ark of the Covenant, the very presence of God. Made of finely woven linen and embroidered with blue, scarlet and purple cherubim, the veil hung from gold hooks attached to four posts of acacia wood, which were also overlaid with gold (Exodus 26:31-33). And strict rules determined when and how the priests could enter this Most Holy of Places, which if not adhered to resulted in death.

The Hebrew word for veil holds one unusual definition—separatrix. In mathematics, separatrix is defined as the boundary separating two modes of behavior. Dictionary.com defines it as "something that divides or separates, as the line between light and dark areas on a partially illuminated surface."

This veil would remain in place for hundreds of years, a constant reminder of the separation that existed between man and God due to sin. Darkness on one side, light on the other...

Exodus 28:36-38 speaks of the gold medallion adorning Aaron's turban. He was required to wear this on his turban to bear any guilt of the Israelites when they consecrated their sacred offerings in order to make the people acceptable. As the animal sacrifices were a prophetic representation of the final and complete Sacrificial Lamb, this medallion held the prophetic representation of the the Cross, the finished work of Jesus.

Fast forward to Good Friday, the darkest day of history that would usher in the greatest Light of all. Jesus spoke his last and released His spirit into the Father's hands.

And behold, the curtain of the temple was torn in two, from top to bottom. And the earth shook, and the rocks were split. The tombs also were opened. And many bodies of the saints who had fallen asleep were raised, and coming out of the tombs after his resurrection they went into the holy city and appeared to many. When the centurion and those who were with him, keeping watch over Jesus, saw the earthquake and what took place, they were filled with awe and said, “Truly this was the Son of God!” — Matthew 27:51-54

Not a simple tear, but a violent act from Heaven. I believe this was the first entrance of God's Kingdom come to earth. Our Heavenly Father gave His Son to remove the barrier and He wanted us to know it. Ripped from top to bottom, the symbolic act clearly tells of the fierce love of God removing the barrier. Nothing would separate God from people for the Son had become the bridge and His Holy Spirit the constant connection.

I am awestruck by this act, so violent yet full of love. A human being would have most likely torn the curtain from the bottom, clearly an act of man. Father God made it clear this tear was by His hand, from top to bottom, from Heaven to Earth. The final declaration of forgiveness and acceptance.

It shook the earth, split rocks, opened tombs and raised the dead to life. Light had invaded the darkness and brought new life, new beginnings, a new way. The Way, the Truth and the Life.

The old way, with laws etched in stone, led to death, though it began with such glory that the people of Israel could not bear to look at Moses’ face. For his face shone with the glory of God, even though the brightness was already fading away. Shouldn’t we expect far greater glory under the new way, now that the Holy Spirit is giving life? If the old way, which brings condemnation, was glorious, how much more glorious is the new way, which makes us right with God! In fact, that first glory was not glorious at all compared with the overwhelming glory of the new way. So if the old way, which has been replaced, was glorious, how much more glorious is the new, which remains forever! — 2 Corinthians 3:7-11

My friends, I have this image of the veil in my mind, it's weighty fabric musty and old from all the years it hung between God and man. As the ground began to shake, I imagine dust shaking loose from the aged fibers and the weighty fabric undulating gently at first from its golden hooks, then rippling more violently as the earthquake shook the ground and framework of the Tabernacle.

Then the heavens opened and perhaps a surge of light shot down from the sky, renting the cloth in two with a tearing sound as loud as thunder and startling as the earth shaking beneath it. Almost as if the fabric once thought to be holy now hung as an offense to the One who hung on the cross.

Do you see it, my friends? The tattered edges of the veil, split and rendered useless? Nothing would separate God from His creation any longer. Do you see how the passion of the Christ rendered the veil impotent and powerless?

But whenever someone turns to the Lord, the veil is taken away. For the Lord is the Spirit, and wherever the Spirit of the Lord is, there is freedom. So all of us who have had that veil removed can see and reflect the glory of the Lord. And the Lord—who is the Spirit—makes us more and more like him as we are changed into his glorious image. — 2 Corinthians 3:16-18

The enemy will attempt to replicate the veil in our loves ones, but even he knows the truth, that he wears the shame of defeat and the veil of lies he attempts to project cannot stand up under the light of Jesus.

Happy Easter, my friends. Love you!