Home Who We Are Salvation Stories Community Miracles Meet The Team The SUM Shop Speaking New Here? Video Teaching
What Happens When You Hunger For More Of God - Lynn's Story
Winning Him Audio Book On Sale

A Miller Family Update: The Battle for My Family 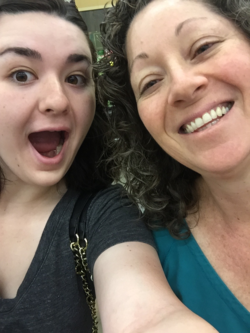 Dear friends, before I jump into those three keys I mentioned last week, I would like to give you an update on some interesting changes in my family—my daughter Leslie and my husband. And I want to thank Karyn for giving me a nudge to do an update on my daughter. I can’t tell you how that touched my heart too.

This update will also demonstrate how we are to contend for words we have received from God and stand against the enemy’s attempts to take them away. It’s a little long so please read to the end.

The last I shared on my daughter Leslie was that she was showing signs of side affects on her memory from her radiation treatments, which culminated in February 2009 after her two brain surgeries in October 2008. She did well initially on the medication the doctor wanted to try to help her memory, but because of its side effects had to stop. She also feels she’s experiencing a disconnect with her vision—what she sees—and how her brain translates it.

My friends, I am standing in prayer against all of this. God told me in 2008 that she would be okay before we even knew what was wrong, so I am proclaiming His words—His promise—over her and binding these spirits of infirmity, fear and lies that are trying to tell her otherwise. I even prayed the armor of God on for her—as the spiritual authority in her life (part of the sanctifying affect of my faith), I will pray everything and every way I feel led to pray for this girl and then give it all over, including her, into the most capable hands of Jesus.

So why am I praying like this? Because the truth of what God told me and what I see Him doing in her life. He told me she would be okay and that she would one day leap as a calf freed from it’s stall.

But for you who revere my name, the sun of righteousness will rise with healing in its rays. And you will go out and frolic like well- fed calves. — Malachi 4:2

These are words (prophetic words) from our God who speaks into existence things that aren’t yet seen.

Now faith is confidence in what we hope for and assurance about what we do not see. This is what the ancients were commended for. By faith we understand that the universe was formed at God’s command, so that what is seen was not made out of what was visible. — Hebrews 11:1-3

What I see God doing in her life is providing her every need. She has pursued her passion for animals, studied hard and now has passed her final exam to be a certified animal groomer. She walked in such favor through this process that she excelled in her studies and has been highly regarded at the grooming shop she interned at. So much so that they saved a place for her there until she finished her final exam. This is her first week as an official groomer there and will now have her own income as well.

My friends, there was a time we thought we’d have to take care of her the rest of her life. Now she is completely healed of cancer, independent, and pursuing her career and passion for animals as God has gifted her to do (this girl can handle the difficult pets that others can’t and literally commands them to be at peace). And for this mama, to hear her daughter say, “Mom, I’m only 21 and I already have my dream job.” is the revelation of Ephesians 3:20 that says God does more than we can ask or imagine. Thank You, Lord and amen!

God has been faithful in every aspect of her life and has done what He said He would. That’s how I know this other stuff is not according to His plan and is definitely not His will. I could easily rationalize and say that she really is okay. This is just part of what we have to live with in her healing.

No! That is the enemy’s lie. Our God is not a half-way or almost there God. He more than enough and more powerful than any lie or deception the enemy throws at us. I will not settle for less than what God has promised me. The enemy is trying to steal away her promises as she’s about step into them in a powerful way. And I will fight for her future with Jesus’ help all the way.

My friends, I want you to understand that we must at times step out in our faith and contend for what God has promised us and stand against the enemy. And God’s Word is our best weapon. And it is important to that we be discerning of what is from the enemy. God’s Word and truth stand unchanging. His promises and faithfulness will not change. So anything that comes against Him, His Word and His promises to you are from the enemy.

Now about my sweet hubby…he still thinks he’s an atheist, but for the first time since I started this mismatched journey 20 years ago, I am seeing a shift. God is softening his heart in amazing ways. This man I adore has become even more caring and generous these last few months, toward me and his extended family. I’m stunned by it, because this tenderness is making him sensitive to the things of the supernatural that the Holy Spirit is doing around him.

Several weeks ago I realized the music he was listening to had messages in it about God, Jesus, and salvation. I was so surprised I had to ask him what he was listening to. It was secular music by artists I know he likes. My friends, I don’t know what that was, but I’ve no doubt that was God moving that day.

Then just this week my husband sent me a link to a local story about two women from Korea who worked on the same floor of one of the hospitals here. They became friends and the more they shared, the more they suspected they could be each other’s long lost sister. They were separated as children and placed in orphanages. And they are! They found each other after decades of wondering and searching, right on the same hospital floor where they both worked! (You can read the story here.)

It’s a stunning story, my friends. I came out the porch where he was sitting and he turned the newspaper to show me the front page. And picture of these two women hugging each other filled the top. “Did you read the link I sent you?”

“Yes, what an amazing story!” I stared at him, considering my next words, because I fully expected the eye roll and head shake. “That is totally God. He brought those two women together.”

He looked at me and nodded. “I can see why you’d think that.”

I was floored. Not only by his lack of skepticism and his understanding, but by a deep sense this wasn’t just a moment to notice and appreciate. The Holy Spirit impressed upon me that it was SIGNIFICANT. I believe this is was the first visible sign of the answer to my prayers and declaration over him that God would give him spiritual eyes to see and spiritual ears to hear (Prov. 20:12). And

Stunning, absolutely stunning! I love Abba! I love Jesus! I love the Holy Spirit! I love how God delights and surprises us as we trust and delight in Him! As our faith grows, His presence and His blessings increase. Our faith is the conduit and the bigger our faith, the bigger the conduit! Praise Him from whom all blessings flow! Amen!

And I want to thank you, my SUM family, for all the prayers you have sent up for my daughter, for me, for my husband and my family. You are a part of my journey just as I am part of yours. God in His great goodness has bought us together to be the SUMites and to be a mighty nation for Him, for His glory. He loves us so much!

My friends, I continue to contend for my own family (especially for my Rachel and her hubby Keith—the enemy is trying to block them from God’s plans and future for them), and I am contending for our SUM family here. I pray that all that God has for each of you to manifest and come into place, according to God’s great plans and purposes for you. In the name of Jesus, amen!

Love you so much!