It's even MORE on Sale

(Read the excerpt below written by a 21 year old who was raised in a spiritually mismatched home.)

SUMite Nation, our book, Not Alone, which we're using for this new series Equipping Our Kids in a Contrary Culture is on sale for even less. It looks like the ebook for Kindle, Nook and iBook have lowered the price down to a buck, ninety nine. $1.99.

That's as low as it's gonna go.

Read along with us through our series this month.

It's a great deal!

Excerpt from Not Alone:

My good friend Shelly has been married for 24 years. Her son, Rickey, recently shared with me a few words about growing up in a spiritually mismatched home. Rickey is 21 years old. He says,

I have to say that the most impacting thing that influenced my faith had to be my mother never giving me the “option” to go to church. It was mandatory. I didn’t want to go, because I would look at my father staying home on a Sunday watching television or whatever else he happened to be doing, and some days that’s all I wanted. However, because I was forced into that sanctuary every Sunday, I began to grow a love and desire for it. It became a necessity for me. I built relationships with the youth leaders and all the youth around me as well. Pretty soon, I was begging to go to church every opportunity I had. If there was an event at church, I made sure I was there.

Rickey is living proof that Mamas can and do impact a child's eternity.

Thank you Jesus. Give us boldness to speak love, mercy, grace and truth with compassion and passion into our children. In Jesus name. Amen. 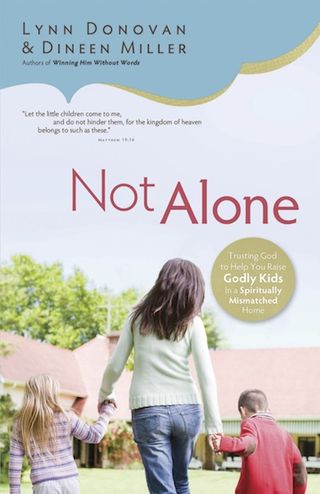 Dineen and I would be so thankful if you would share on your social media. THANK YOU! (click buttons below.)

Posted by Lynn Donovan in Back To School, Books, Children, Not Alone, Parenting | Permalink | 0 comments