My friends, where do I begin? I have experienced tremendous defeat and disappointment in the last 30 days as well as amazing breakthroughs coupled with providential appointments, miracles and more.

The spiritual warfare has been relentless.

My friends, now I’m mad. I want to punch satan in the face and I promise you this, my mission for the rest of my life is to hurt the devil and destroy the demons.

But before I bring you to this place of war, what I found is that God needed to teach me about surrender. And man, can I just say, bummer! It’s hard.

Most of you know that I’ve been working on a new manuscript for over a year. My ability to write came under intense warfare last year through my son’s arrival in California. His family moving in, baby and all. His marital separation shortly after and what followed was six months of illness. Both myself and the baby. I kid you not, I was ill every two or three weeks, on the couch, in the doctor’s office, ill. I couldn’t pull myself out of bed let alone try to be creative and write. A entire year of warfare in one form or another was at hand.

But there are great answers to prayer even in the midst of spiritual warfare. My son’s wife returned to her marriage nine months later and the family is doing well. This was an outright miracle! Truly! Time marches on. I finally complete my book proposal and four chapters of the book.

Then on June 16, 2015 my manuscript was turned down for publishing. My title and content were now old and many new manuscripts with similar content and title were already in the process of coming to market.

I missed the window.

Disappointment doesn’t come near to describing the feelings that swirled within. I have learned to release offense and disappointment which I experience at the hands of people. But my friends, what do you do when you feel disappointed by God?

You see, I KNOW the Lord gave me the outline for this book. He spoke the title to me, clearly during my prayer time. I had several people, who don’t know me, speak prophetically over me about it. So, what do you do when you feel like God set you up for a great disappointment?

I truly struggled with trust for the first time in a long while. During the past year, I believed scripture promises and I spoke them over myself and my writing. I believe so fully that this book would come to market, that I had set a number of things in motion in support of the future book launch. I was that confident in my faith and in hearing the Lord.

Devastated, I wrestled with confusion. My prayer time faltered. I felt a terrible and great distance come between myself and God. I cried. A lot. I asked Dineen to pray for me. I tried to understand why God would tell me to do something then allow the warfare to ensue to keep me from completing the assignment.

Am I alone in this?

In this season that I experienced beginning mid-June through early July, faith was difficult and the core of my belief was challenged. But ………

Praise be to Jesus because He will not leave us in this place.

I have so much more to tell you, so stay tuned, as you have me all week. (Dineen is traveling this week) Get ready for some blondeness, some crazy antics, and get ready as we learn to deal with “our stuff.” Do you truly want to walk in freedom? Do you want to walk in powerful faith? Well stay tuned as we walk through the valley of the shadow of death. There is something waiting at the end. And can I just tell you…. Everything is going to be okay.

Today, in my heart I’m moved to pray for you. Perhaps you are also dealing with faltering faith or great disappointment, let me pray for you. Tell me how to pray and the specifics in the comments. Because our God is not dead. He will bring beauty from ashes. We are on the road to learn all about His redemption of disappointment. We need to know how to walk fully in this kind of tried and true faith because it’s going to take every bit of our conviction to walk in the months ahead in this world that is growing increasingly darker and more evil.

I love you, SUMite Nation. You are more powerful than you know. You are braver than you think. God has not abandoned you. He will, in due time, explain all things. He loves you WAY TO MUCH to leave you where you are.

See you in the comments. Love you so much, Lynn And stay tuned because there is MUCH more to come. Hugs. 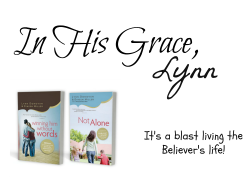