Part 4: The End of the Story


God had now reassured me of His faithfulness in this journey, but it was already midsummer and still no baby. The due date I had been given was August 28th, so I had expected baby several months earlier, such that it would be clear to everyone by the baby's size that it truly was that same child. Now, with everything He had led me through I still expected baby to come early. I was still sure God would do things how I expected all along-that was what He had asked me to believe and I could see the possibility for so much good this way! And honestly, I just couldn't imagine waiting five more weeks and I felt I shouldn't 'have to after everything.

I fought that due date for months but now with a little over a month to go I realized that by holding God to my expectations of baby coming earlier, the whole thing was becoming twisted into my demanding it from God. I'd found myself in this place just once before and it terrified me that I had let myself be talked into treating God that way. So I knew I had to let all my notions go once and for all, and surrender to God's way alone.

And so I kept waiting.

I waited. And waited, and WAITED.  All throughout the pregnancy I had fought that August due date with everything I had. My labor began on Aug 27th, and  after waiting so long I was excited to have baby come even one day early, but God clearly had a point to prove, and a sense of humor. I labored gently all though Aug 27 and on into August 28th, and my miracle baby finally came about 11 minutes to 9 pm ON the due date. 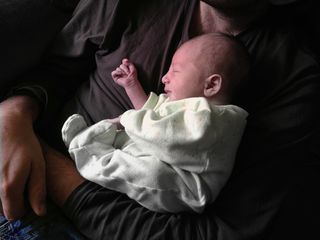 I finally started to feel those characteristic first tightening the morning of Aug 27. But even with a few hours of walking and a check up, things didn't pick up enough and my contractions continued fairly regularly through the night, while I slept in between. Finally after a lot more walking the contractions started to get more painful and we headed to the hospital.

Having my husband there in the delivery room, he got to see prayer in action. There was no other way, I knew I needed it. And he watched me walk through this labor, watched me struggle through something so hard- after everything this pregnancy was- and he was there by my side, and he saw me lean on my Jesus, hard.

And then baby was out and they said, it's a boy and I started to tear up, and I said gently, ' hey Matthew,' the name that we had somehow agreed on should baby actually turn out to be a boy! Shortly after (first) greeting my littlest son, I also said out loud, 'this is still our miracle! '

They asked us his name and my husband said 'Matthew', Then they asked his middle name. My husband said he didn't have one yet and I knew in an instant who he was meant to be and said, 'Augustine.' I didn't really even realize what had happened until after I'd said it, the Holy Spirit just took over! And in that moment, the last unresolved details of God's plan for this journey became clear.

All spring and even summer I had been so sure God was going to work a miracle and wow everybody, but I discovered later this certainty came from my own understanding, God had never actually promised such a thing. The same was true with my certainty that this child would be the little girl I've been waiting for. All along I was meant to have a boy.

Aug 27 was the feast of St Monica, the unequal yoked mama who prayed her wayward son into sainthood, and who also prayed for her husband, just like us! :) I had thought maybe baby would come then but instead he was born the next day, Aug 28th - the feast day of her son: St Augustine.
The timing was clearly God and I'd just been saying a nine day prayer for my husband too. Everything else aside, God had said this was our miracle, and so, he was. -Gill

Thank you Gill for your amazing story of faith and how we can watch God create beauty from ashes.

The Spirit of the Sovereign Lord is on me,

because the Lord has anointed me

to proclaim good news to the poor.

He has sent me to bind up the brokenhearted,

to proclaim freedom for the captives

and release from darkness for the prisoners,

2 to proclaim the year of the Lord’s favor

and the day of vengeance of our God,

to comfort all who mourn,

3     and provide for those who grieve in Zion—

to bestow on them a crown of beauty

the oil of joy

and a garment of praise

instead of a spirit of despair.

They will be called oaks of righteousness,

a planting of the Lord

for the display of his splendor. 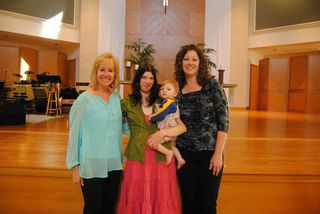