Home Who We Are Salvation Stories Significant Resources Meet The Team The SUM Shop Lynn Donovan Ministries New Here? Video Teaching
Part 2: Trusting God for the Impossible
Part 4: The End of the Story 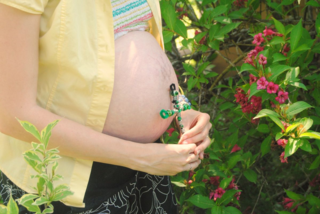 God had asked me, in the depth of my soul, to trust Him to bring my unborn baby back to life. And although everyone else said this had to be a new baby, I trusted God that it wasn't, and now that I was most definitely pregnant again, I waited for God's miracle to become visible to the world.

The official due date I was eventually given was 2-3 weeks earlier than what it should have been, given the blood test I took at the clinic that came back 100% negative. But most of all, God never once told me otherwise (directly with words to my heart or without words in that deep secret place in my soul). Indeed, it would have been much easier if He had. Continuing to hold onto this baby in my heart was the hardest thing I've ever had to do. Yet every time I began to think this could be a new child and would ask God about letting go of Annabelle so I could grieve and move on, I found no peace. The only path for me was compete trust there in the dark.

A good friend also told me to keep trusting, because this was all so much bigger. She would encourage me to hang on to my boys, to my husband and to the baby, and to keep hang on to God, trusting what He had spoken to my soul, no matter what facts or evidence I might see. God had asked me to walk by faith alone. And she kept assuring me often that there was more to this than I could see, that no matter how it ended, it would be a miracle.

At the time I struggled with seeing it that way if things didn't go how I had understood and was expecting. As time went on I realized I really didn't know what would come of all this, and that was okay. I discovered a whole new depth of wonder as I learned to surrender to the utter mystery of His sovereignty.

The journey was like nothing I'd ever walked before. God had always come through with whatever He had asked of me in the past. By summer I was convinced this baby had to come any day now. I even started to feel mild contractions which I hadn't had early on with any of my other babies. But they came and went and nothing happened, and God remained silent on the issue.

As time went on like this, the truth of what God was really up to grew more mysterious. A wise friend listened to my story and then spoke right into the darkness itself, that God was letting me walk in this darkness now because He knew the joy and the strength and the good that would come out of it. God knows that it is in the darkness that we find our strength (and especially our strength in Him!) And so He was lovingly allowing this trial of my faith.

He was making me holy.

I was so in awe of her words, and they were utter transformation in my soul. I had felt this struggle in my spirit many times before, especially when God felt absent. Practically at least, I often thought it must be something I had done  when God felt distant, like I had forgotten about him and now He was waiting for me to come wholly after Him again.  And yet the darkness itself, was a gift! For so long I had felt the need to fight against the darkness, the overwhelm, the heaviness, the helplessness, whatever felt wrong to me in my soul when they were a good thing, a gift, the real path TO holiness, and to Him!

The pregnancy itself was also unlike any other I'd experienced before (who else has ever waited EXPECTING a baby for 12 months?). It was really hard on me, both physically and spiritually. The physical challenges, of course, my husband understood but it was impossible for him to have any concept of what walking through this was like for me spiritually. It was the hardest thing I ever had to do, holding onto this baby in my heart. There were what felt like many days, when I would be so tired by lunch time I'd have to go have a nap instead of getting food for my family. And by the end of the day I usually wasn't up to doing too much in the kitchen, or all that pleasant to be around either. As this went on, I began to notice that my husband had been stepping up with the housework to help fill in the gaps. I also realized he seemed to be a whole lot more patient with me lately through all my tiredness and upsets and I discovered this seemed to have started right after I specifically thanked him for being extra patient at my priest's instruction.

I began trying to find something to thank my husband for each day, and began to have some real success from the awesome marriage tips that Shaunti Feldham shares. In particular God helped me understand that I don't have to be ruled by my emotions; He gave me new perspective to see them as fleeting, and taught me to let go of my negative feelings and frustrations quickly, which helped take more stress off of my husband (stress that I had been contributing).

One night my oldest son was telling me something about bad guys and how (like I've tried to teach him) they aren't really bad guys (usually) just misunderstood or they don't understand the real truth etc...(Take the baddie cars from the 2nd movie- they were all lemons and never felt appreciated) And for some reason as I was reminding him of this it hit me so clearly: that by pushing me so hard with all of this- God was also giving my sweet husband greater opportunities to extend grace to me- as he saw me struggling. Through this journey God was giving my husband opportunities to grow in that beautiful, selfless love! It was such a profound moment to suddenly realize how God was working on my husband's heart with this too!

And in that way, I discovered that even though I was still waiting to meet this special baby, God had already been faithful! He had spoken to my heart right from the beginning that this miracle baby would bring change to my husband's heart and even with the baby still snug in my tummy, I could already see that it was! Truly, this was our miracle! While I still believed it was the same baby, as God had still not given me any indication otherwise,  I began to accept that it could be a boy and that either way,  the baby might not come before the due date or possibly not till after it sometime, and so it might not look anything spectacular to anyone- unless they are living close.  Close enough to see the miles that this man has come this last year- while I've been walking this journey alongside him with all the faith God has given me. Boy or girl, this was our miracle because it was alr

Come mid August I was still waiting. I knew that only God could know the timing and maybe there would be no great manifestation of God's power- ( for the world even) because God was working something much more hidden, in the depths of a soul. And maybe, that was the real miracle.