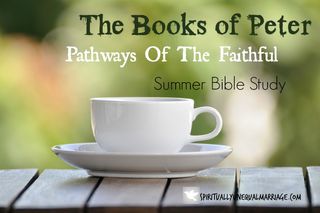 Peter’s story of restoration is one of my favorites in the Bible. And I think knowing where he came from gives us even deeper appreciated of his letters which reflect the man of faith he became. So let’s just jump to John 21 and look at the foundation Jesus built in the man we know as Peter.

When they had finished breakfast, Jesus said to Simon Peter, “Simon, son of John, do you love me more than these?”

Peter was grieved because he said to him the third time, “Do you love me?” and he said to him, “ Lord, you know everything; you know that I love you.”

Jesus said to him, “ Feed my sheep. Truly, truly, I say to you, when you were young, you used to dress yourself and walk wherever you wanted, but when you are old, you will stretch out your hands, and another will dress you and carry you where you do not want to go.” (This he said to show by what kind of death he was to glorify God.) And after saying this he said to him, “ Follow me. —John 21:15-19

This transaction is very symbolic. First Jesus told Peter he would deny Jesus three times, which Peter did. And it is Jesus who also restores Peter, three times. I believe Jesus knew exactly what Peter needed to be able to move forward as the rock upon which Christ’s church would be built.

But let’s dig a little deeper into the Greek meaning behind the two version of the word “love” used in this passage.

The first time Christ asks Peter, “Simon son of John, do you love me more than these?” he uses agape, which portrays love as volitional (a choice) and self-sacrificing. Peter answers him, “Yes, Lord, you know that I love you.” But he uses phileō, which means a brotherly type of love with common interests.

The second time Christ asks Peter this question, He again uses the agape form (“Do you truly love me?”). And again, Peter answers the same, using the phileō form of love.

Finally, a third time, Jesus asks Peter, “Do you love me?” Only this time he too uses the phileō form of love and in a sense he’s asking Peter, “Are you really my friend?” Peter didn’t quite seem to catch on to what was going on, and though hurt, he affirms his love for Christ in the same form he had the previous two times, phileō.

I wonder if Peter was afraid to confess such devotion out of fear. He’d let his Messiah down once. Was he afraid he would again, that he didn’t have what it took for the long haul? As I read this part of Peter’s history and imagine how he would have felt, I believe his self worth was at an all time low, which gave Jesus the opportunity to not only restore him but to define him.

Peter was about to learn who he was and whose he was—his identity in Jesus. And as we enter into his letters, we will see Peter as the man Jesus created him to be. A man sold out for Jesus because of his agape love for his Messiah.

I love Peter’s story because it reminds me that even in our worst moments, our bad choices, our failures, our losses...Jesus restores us and we can move forward in grace and truth.

And after you have suffered a little while, the God of all grace, who has called you to his eternal glory in Christ, will himself restore, confirm, strengthen, and establish you. — 1 Peter 5:10

Peter shares this bold truth with us because he understood it more intimately than most. On a beach as he sat soaked to the bone with the smell of fish cooking on a fire, Jesus himself restored, confirmed, strengthened and established Peter, the rock on which He would build His church.